Irish Shoppers Spent €316m On Groceries In One Week: Nielsen

Shoppers in Ireland bought approximately €316 million worth of groceries in the week ended 8 March 2020, new data from Nielsen has revealed.

The figure represents a 2.4% increase in grocery spend compared to the preceding week this year and a 7.6% growth against the same week in 2019.

Sales of health and beauty products increased by 35% year-on-year in one week, while household goods saw a 31% growth.

Hand sanitiser sales in the country grew by more than 1,000% year-on-year in the week ended 8 March, generating around €11,300 in sales.

Meanwhile, customers bought €81,800 worth of soap in the same week, a 231% increase compared to last year.

The sales of baby milk was up 29% during the week, while baby food sales jumped 22% and disposable nappies by 5.4%.

However, sales of fruit and vegetables, bakery, frozen, chilled, and confectionery items, as well as alcohol, slowed during this period due to over-performance in other categories.

The spike in the sales of groceries is a result of panic buying amid fear of coronavirus pandemic, the study noted.

Karen Mooney, Ireland Market Leader at Nielsen, commented, “Panic buying appears to be at its height, with many retailers now implementing buying restrictions on products that are high in demand.

“However, given that many of the products that are seeing significant growth at the moment are non-perishable and non-expandable consumption, we expect to see a drop off in sales in the coming weeks as people stop panic buying and begin to use the stock that they have already purchased.” 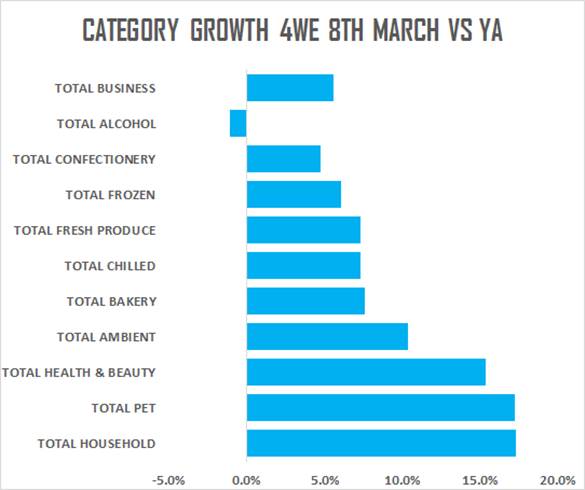 In the four weeks ended 8 March, household and health and beauty were the biggest gainers in Ireland, increasing sales by 17% and 15% respectively, data showed.

Other categories that showed a significant sales increase in this period include pet care (+17%) and ambient grocery(+10%).

Disinfectant liquids (+93%), antiseptic (+100%) and household and personal cleaning items such as washing up liquid (+14%) and household bleach (+14%) emerged as the top-selling hygiene products in Ireland.

The demand for cupboard staples in Irish supermarkets increased significantly in the four-week period, with the sales of pasta and canned vegetables up by 26% and 25% respectively.

The sales of toilet tissue increased by 19.1% year-on-year in the four weeks to 8 March, while the sales of baby care products also grew remarkably.