Growth rates have remained high across the entire UK grocery spectrum, according to the latest Kantar data, however some of these gains have been offset by declines in 'on-the-go' purchases.

The growth in e-commerce due to the coronavirus pandemic has certainly boosted Ocado, which saw its sales rise by just under a third (32.5%) in the 12-week period to 17 May.

With more consumers shopping locally, there was also a major boost for The Co-operative, which saw a 30.8% increase in sales to put it on 7.0% market share; a level it last achieved in 2011.

A stellar performance was also seen at Iceland, with the frozen food retailer benefiting from the consumer stockpiling trend – sales were up 28.6% in the period, as Iceland achieved its highest market share since 2000 (2.4%).

In terms of the UK market's 'Big Four', market leader Tesco saw a 12.7% increase in sales, while there was also double digit growth at Sainsbury's, which saw sales up 12.5%.

Commenting on the findings, Fraser McKevitt, head of retail and consumer insight at Kantar, said, “In the most recent four weeks, the trend towards fewer, larger shops that we saw in April broadly continued. Shoppers visited the supermarket 3.5 times per week on average, meaning 100 million fewer trips overall than the same month last year, and increased their spend each trip to £27.41 – nearly 50% more than they did during normal times.

"The greatest rise in spending has been among families with children over the age of 16 living at home, reaching £618 on average this month compared with £545 last May, as they continue to cater for more people living under one roof and compensate for meals not eaten at work, school or college, or while socialising with friends."

McKevitt noted that on-the-go spend was considerably down in the period, with these categories usually adding up to around £1 billion over a 12-week period – which is impacting some grocers. 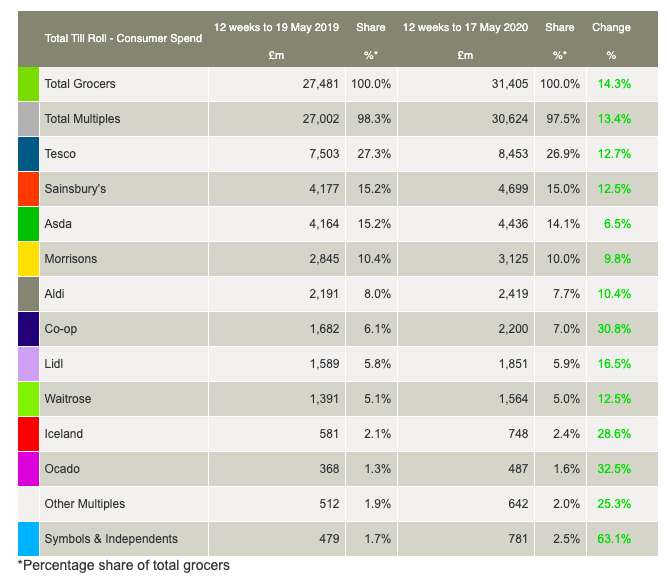 L'Oréal Sees Sales Rise By 13.1%, Boosted By Growth In China

Unilever Warns Of Higher Inflation As Sales Rise 2.5% In Q3