Rémy Cointreau, Pernod Ricard and Diageo are among the companies that could see a profit hit in the coming months from the Coronavirus outbreak, which is crimping retail and duty-free sales, and creating supply disruptions across China, Moody's has said.

In a report, Coronavirus outbreak will curb Chinese consumption and hit quarterly earnings, Moody's Investor Service said that Rémy Cointreau and Pernod Ricard may suffer more than rivals because of their high exposure to the Chinese market, as the graph below shows.

"Moody’s expects alcohol consumption in China to slump because of travel restrictions and quarantine measures to contain the infection. If the virus follows a similar pattern to the Severe Acute Respiratory Syndrome (SARS) outbreak in 2003, the reduction in companies' earnings could be significant but probably only short-lived.

"The next few weeks will be vital for determining the extent of infection and the effectiveness of the quarantine measures.” 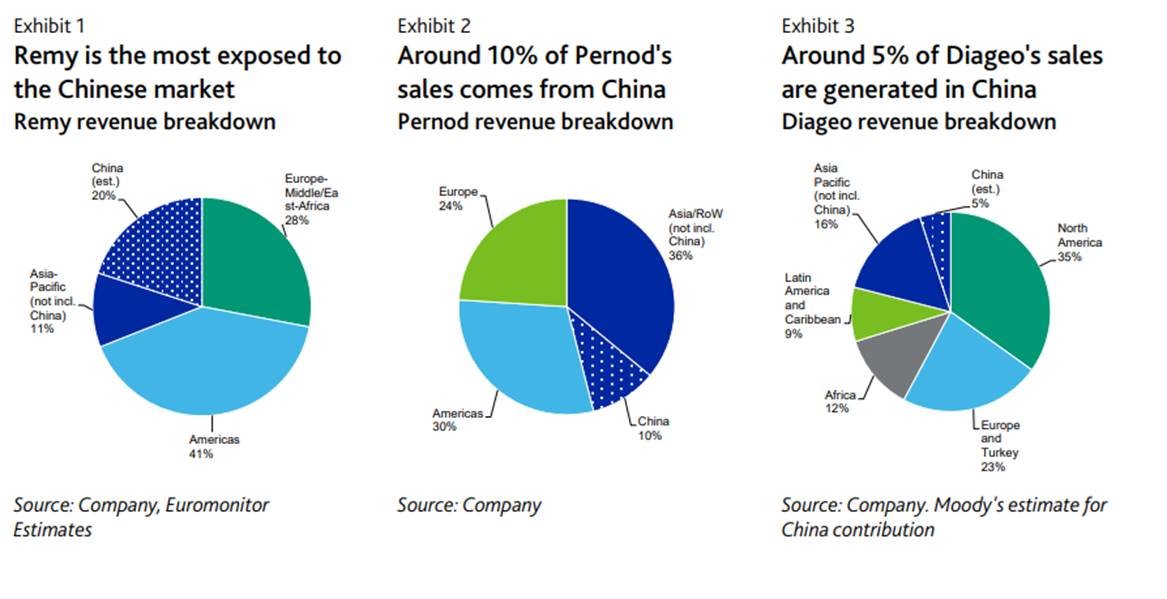 China is one of the world's largest drinkers of liquor, consuming 26% of global alcoholic beverage volumes, according to the report.

Rémy gets 20% of its sales from China, while Pernod pulls in 10%. Diageo, the world's biggest spirits company, takes in 5% from China, the report said, citing Euromonitor data.

'Because of travel restrictions and quarantine measures to contain the infection, we expect alcohol consumption to slump and this will hit quarterly earnings,' the report read.

The impact could be felt the most in the coming months as it takes longer for distributors to replenish stock than when they were able to before the festive season, Moody's said.

The combination of an extended Lunar New Year holiday and the rapid spread of coronavirus that has killed over 420 people has jammed logistics channels into and across China, Reuters reported on Tuesday.

The clampdown on travel from and to China will also have a knock-on effect on duty-free sales, which has been growing in the high-single or double-digit percentages, mainly due to strong air passenger volumes and steady spending from Chinese customers.

However, if the Coronavirus outbreak follows a similar pattern to the Severe Acute Respiratory Syndrome (SARS) outbreak in 2003, the reduction in companies' earnings - though significant - could probably be short-lived, the report said.

During SARS, Rémy flagged a 23% decline in quarterly global cognac sales between April and June 2003, which was then followed by a rebound in the following quarters. Similarly, Pernod and Diageo's impact from SARS was fully offset within a year, Moody's said.

However, Moody's noted that the SARS episode is not a perfect comparison to Coronavirus as the size of the Chinese alcohol market was much smaller in 2003, when the contribution of Chinese operations to these companies' group profits was more modest.