Online retailers saw a 65% gain in cumulative market capitalisation in 2020, compared to the previous year, a new study by GlobalData has found.

Amazon led the way with a 78.4% increase in market capitalisation last year, according to the study.

Commenting on the findings, Keshav Kumar Jha, business fundamentals analyst at GlobalData, said the major online retailers benefited from "the increase in demand for e-commerce and contactless delivery services owing to the raging pandemic of COVID-19 the world over."

He added that the ability of large retailers "to capitalise on their distribution strength and offer uninterrupted and timely service during the pandemic also helped them win investors’ confidence.”

Amazon surpassed  the $1 trillion mark in market capitalisation during the year, which put it ahead of its nearest competitors Alibaba and Walmart, GlobalData's study found.

Retailers including Walmart, Nike, Lowe’s, Fast Retailing, Target, and Dollar General recorded over 20% YoY growth, which Jha attributed to their decisions to "invest in building their digital capabilities such as implementing digital-powered retailing supply chain and strengthening online offerings".

However,  they were unable to match the preexisting e-commerce strength of Amazon.

Elsewhere, Magazine Luiza, the Brazilian omnichannel retailer, also entered the top 25 retailers list, with a 60.2% increase in its market capitalisation, year-on-year. The company’s stock surged on the back of strong e-commerce sales in the first three-quarters and its decision to strengthen further its online offerings such as selling books.

In terms of a potential return to normality from a shopping standpoint, Jha added that "a successful vaccination drive could ease the social distancing norm by allaying people’s fears and helping retailers gain growth momentum in the months ahead.” 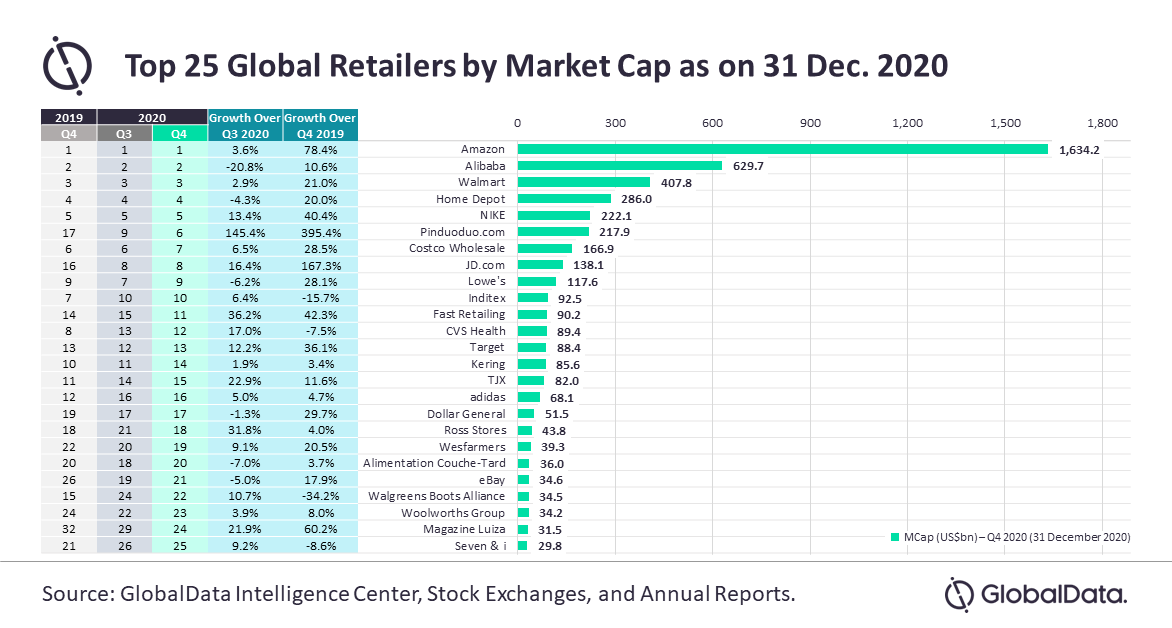 Battle Lines Being Drawn As Amazon Moves On Bricks and Mortar Retailers: Analysis

How Packaging Firms Can Boost Visibility And Embrace Sustainability

Data, Dark-Stores And Delivery – The Changing Face Of Grocery