The UK’s second- and third-placed supermarkets, Sainsbury’s and Asda, are pretty much neck and neck in the latest Kantar Worldpanel market share figures, holding 15.4% and 15.3% share respectively.

Market leader Tesco sits on 27.4% market share, having posted a 0.9% increase in the period, however, as Fraser McKevitt, head of retail and consumer insight at Kantar Worldpanel, explains, the high-profile launch of its new discounter concept, Jack’s, is unlikely to have made that much of an impact.

“Despite widespread interest in the September launch of its discounter concept, Jack’s, the small number of stores planned means it won’t impact on Tesco’s market share without a significant expansion,” he said.

“Within the main supermarket ‘Exclusively at Tesco’ lines continue to be a real bright spot, with 41% of British shoppers buying one of these products during the last 12 weeks, spending a combined £102 million.”

The Bradford-based retailer would be wise to look over its shoulder, however, with discounter Aldi posting a 15.1% increase in sales to sit on 7.6% market share, while rival Aldi posted a 10.0% increase to sit on 5.6% share.

‘Some 6% of Aldi’s sales came from premium own-label lines including its Specially Selected range – a higher proportion than any other supermarket – and its growing number of stores helped it increase its market share by 0.8 percentage points to 7.6%,’ Kantar Worldpanel said.

Following a bumper summer period, Kantar Worldpanel said that the most recent period reflected a return to more seasonal spending.

“Consumer spending often slows in early autumn, after the excesses of summer barbeques and before the festive season kicks off,” said McKevitt.

“The arrival of colder weather and darker evenings has inspired consumers to embrace hearty comfort foods and stock up on Sunday roast staples; shoppers spent £51 million on whole chickens, £62 million on roasting joints and £4 million on Yorkshire puddings in September alone.

“Christmas will be here before we know it and some families seem to be getting into the spirit already – 8% of households bought mince pies last month, spending a total of £4 million with 70 days still to go before the big day.” 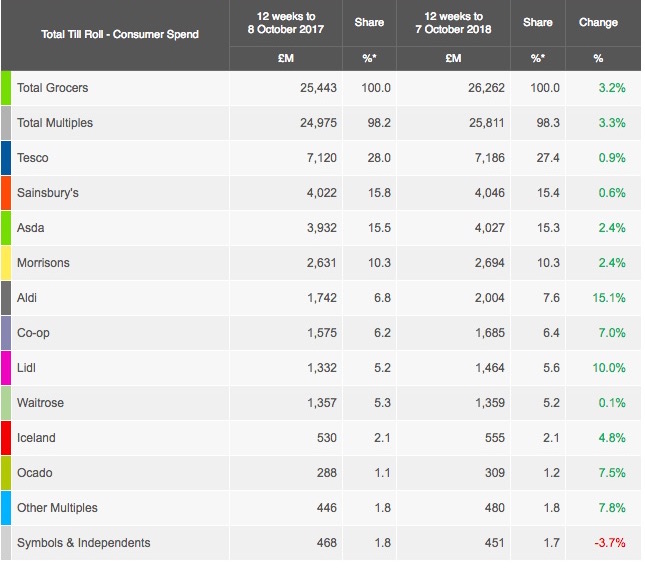