Shopping For Votes: Who Shoppers At The UK's Main Supermarkets Are Backing

The UK holds a General Election this Thursday (12 December), in what has been widely described as the 'Brexit election' – determining whether the country will leave the EU under the terms of Prime Minister Boris Johnson's agreement, or whether more fuel is to be added to the Brexit fire.

Ahead of the big vote, GlobalData Retail conducted a survey to determine the voting intentions of shoppers by the main supermarket they use.

'According to GlobalData’s supermarket election survey, the Conservatives may struggle to win a decisive majority in Parliament, but if seats were supermarkets they’d be on for a landslide,' GlobalData said in its report. 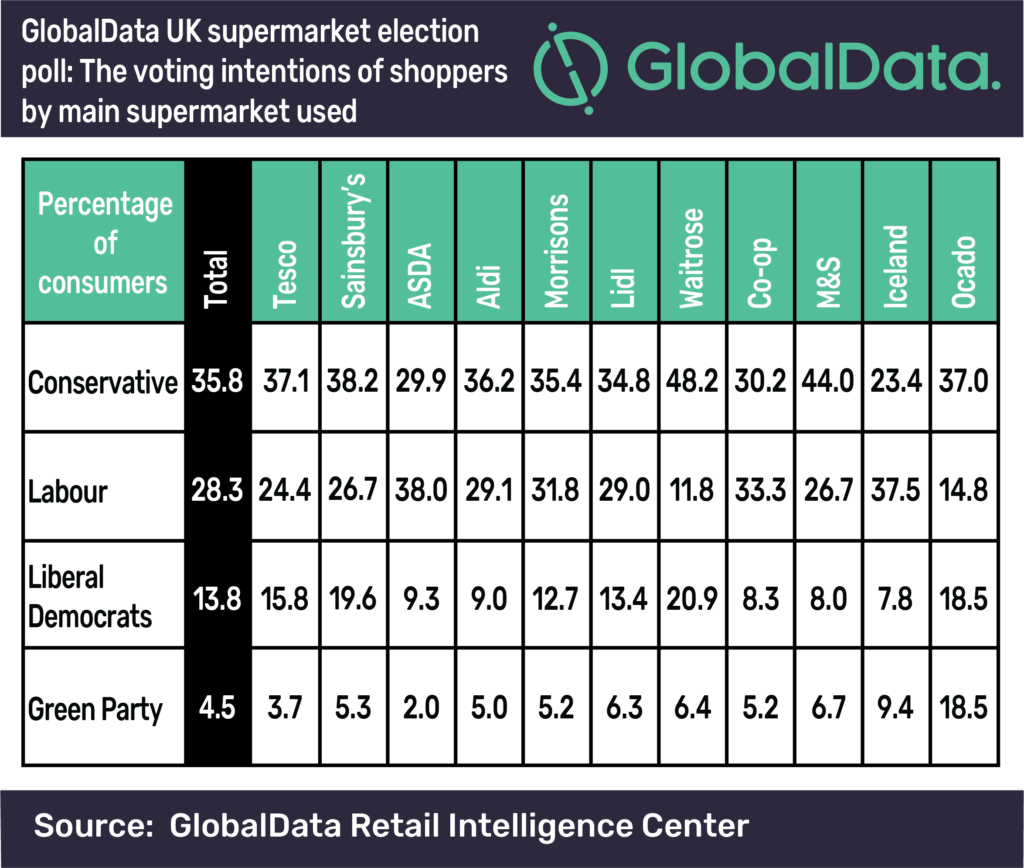 In terms of the retailers themselves, the highest percentage of shoppers at market leader Tesco intend to vote Conservative (37.1%), with less than a quarter opting for Labour (24.4%) and 15.8% voting for the Liberal Democrats.

Sainsbury's shoppers display a similar mindset (38.2% Conservative, 26.7% Labour and 19.6% Liberal Democrat), however at Asda, the roles are reversed, with 38% of shoppers that visit the retailer choosing Labour, ahead of 29.9% for Conservative and 9.0% for the Liberal Democrats.

The margin between the top two parties is relatively small among Morrisons (35.4% Conservative, 31.8% Labour) and Co-op (33.3% Labour, 30.2% Conservative) shoppers, while the supermarket to attract the highest number of Liberal Democrat voters is Waitrose, where just over a fifth (20.9%) intend to back Jo Swinson's party, relegating Labour to third place (11.8%).

Notably, in the last general election, Morrisons saw a higher percentage of Labour voters than Conservative, however this time out, those roles have been reversed.

As GlobalData explained, both discounters "continue to increase their appeal to middle England, by changing consumer perceptions of their brands and significant expansion of physical stores into more affluent areas that typically vote Conservative".

Notably, despite environmental issues being firmly on the agenda across all major supermarket groups, few shoppers are opting to back the Green Party, barring a couple of exceptions.

The party is "is overrepresented in Iceland, [...] where it has a 9.6% share, which shows that its messaging over palm oil and other sustainability issues has been successful in attracting shoppers that care deeply about such issues,' GlobalData said.

'Interestingly, the Green Party also does well at Ocado, where it has an 18.5% share of the vote, and indicates that many of its voters may deem online grocery delivery a more environmentally friendly option than travelling to stores.'

Migros Expands Partnership With Too Good To Go To National Level