Musgrave-owned SuperValu stands on 22.2% market share, seeing its sales up 0.4% year-on-year. In second place, just 20 basis points behind on 22.0% share, is Tesco, with the retailer posting a 3.4% sales increase. Dunnes Stores, which places third on 21.1% share, saw a 2.0% increase year-on-year.

“SuperValu has improved the number of items sold per trip, but it has done so at a lower price point, and it now holds a 22.2% share of the grocery market, down 0.3 percentage points on last year,” said David Berry, director at Kantar Worldpanel.

“This is the fourth consecutive period of growth for Tesco, which is a clear indication that it’s achieved a turnaround in performance. This is also only the second time since July 2014 that Tesco has posted a year-on-year increase in market share.”

Berry noted that while Dunnes has lost ground on Tesco in these figures, shoppers at the retailer are spending more. “The average Dunnes basket now includes an additional item and is worth an extra €2, suggesting that it’s performing well in the larger ‘main’ shop of the week and less so among smaller top-up trips,” he said. “If Dunnes can encourage some of its lapsed shoppers to return to the store then it could be seeing a healthy increase in sales growth and market share.”

Lidl stands on 12.0% share for the period, with Aldi on 11.5%, meaning that if both discounters are combined, their share of 23.5% is ahead of any of their mainstream rivals. 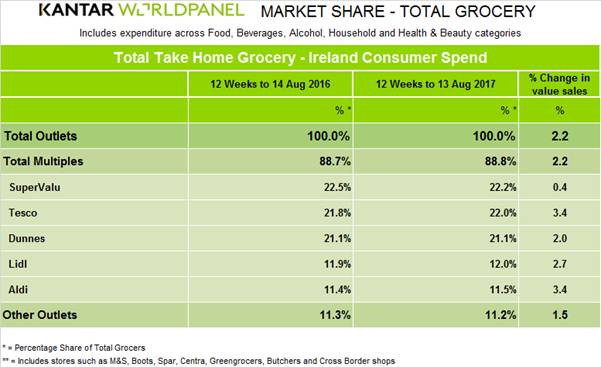 Tesco Persists With Jack's Format As It Plans New Store