Tesco and Sainsbury’s are feeling the pressure from Aldi and Lidl as the festive season approaches, according to the latest market share data from Kantar Worldpanel.

“Aldi’s sales increase of 15.5% this period is the fastest rate since January 2018; this has helped lift its market share by 0.9 percentage points to 7.6%, which is the largest year-on-year share gain by any retailer in nearly four years,” commented Fraser McKevitt, head of retail and consumer insight at Kantar Worldpanel.

“Meanwhile, Lidl is in double digit growth for the second month running; sales are up by 10.2% compared with a year ago and its market share is up 0.4 percentage points to 5.5%.”

Outside of the discounters, the biggest sales increase was seen at the Co-op, which saw sales rise by 5.1% to hold 6.3% market share, while Iceland saw a 5.0% sales rise to sit on 2.1% market share.

“Nearly 37% of Iceland’s sales come from the more affluent ABC1 social group – five years ago this was less than a third,” said McKevitt.

“Sales are already up by 5.0% this period and while frozen food is still increasing, 94% of this growth actually comes from its fresh, chilled and ambient food aisles.”

Other than Sainsbury’s, Waitrose was the only other retailer to see a decline in sales in the period, of 1.0%. The upmarket grocer now sits on 5.1% market share.

At an overall market level, sales increased by 2.6%.

This is slower compared with recent months but still represents a £663 million increase in sales through the tills, Kantar Worldpanel said. Much of the growth came through smaller top up trips, which increased at twice the rate of larger trolley shops. 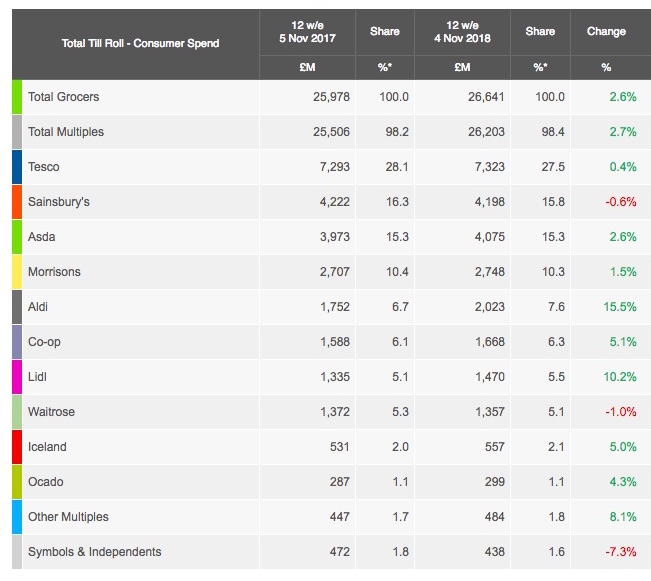 Online Grocery Market To See 23% CAGR Between Now And 2030