The seventh edition of BBFAW's annual report also found Switzerland's Co-op Group as one of the top performers when it comes to animal welfare programmes.

The BBFAW is backed by Compassion in World Farming and World Animal Protection.

An expert advisor to the BBFAW, Dr Rory Sullivan, said, "The benchmark exposes the gap between policies and performance, highlighting those companies whose governance processes work effectively and those that are not fit for purpose in a world where farm animal welfare is an increasingly important driver of business value."

According to the 2018 report, UK companies scored a higher overall average of 61%, while North America obtained 28% and Europe, excluding the UK, managed 34%.

Philip Lymbery, CEO of Compassion in World Farming, commented, "This position, however, could be undermined by Brexit, if existing welfare legislation is not retained in the UK.

"Conversely, Brexit could be an opportunity for the UK to get even further ahead if the government were to make its own animal welfare legislation, for example, by introducing a ban on caged egg production, as is the case in Germany, and banning live exports for fattening and slaughter," added Lymbery.

The study assessed around 150 companies, out of which 52 belonged to the retail and wholesale sector.

It included 50 of the world's largest food retailers, with annual revenues of over $10 billion (€8.79 billion).

In the retailer and wholesaler segment, seven companies moved up one tier, while four fell by one tier and 28 were non-movers. 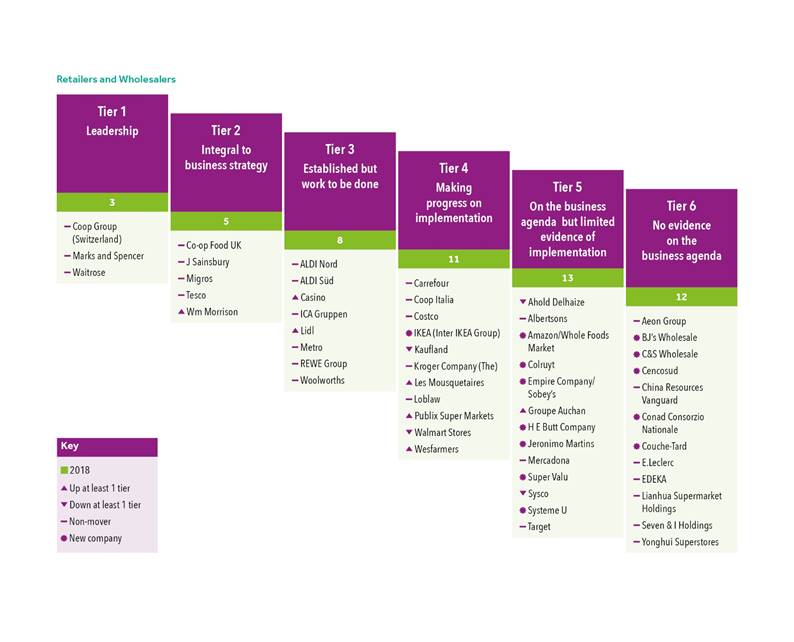 Among the retailers, Morrisons, Lidl, Casino moved up one tier, while Tesco, Sainsbury’s and Co-op Food UK were unmoved.

Kaufland and Walmart slipped one tier due to increased weightage on reporting of performance related to animal welfare measures.

"However, these encouraging findings on management processes are not matched by performance. For example, while just over half of companies report on the proportion of animals that are free from close confinement, only one in four companies covered by the benchmark provides any information on the proportion of animals that are stunned prior to slaughter, and only one in five companies reports on live animal transport times."

The benchmark is a long-term change initiative that is showing signs of progress, the BBFAW reported in its statement.

Philip Lymbery, the aforementioned CEO at Compassion in World Farming, added, "The benchmark and the investors supporting it have played a key role in keeping farm animal welfare firmly on the corporate agenda.

"As this year’s report shows, we need to ensure that this attention delivers real and concrete benefits for animals farmed for food," Lymbery added.

No Mask, No Shop - UK Supermarkets Insist On Face Coverings

Irish Food And Drink Exports Declined Only Marginally In 2020: Report