Discounter Aldi has overtaken the Co-op to become the fifth largest grocer in the UK, according to the latest market share figures from Kantar Worldpanel, for the 12 weeks to 29 January.

“Just a decade ago Aldi was the UK’s tenth largest food retailer, accounting for less than 2% of the grocery market,” commented Fraser McKevitt, head of retail and consumer insight at Kantar Worldpanel.

“Since then the grocer has grown rapidly, climbing the rankings by an impressive five places to hold a 6.2% market share. Underpinned by an extensive programme of store openings, the past quarter has seen Aldi attract 826,000 more shoppers than during the same period last year.”

Tesco retained its market leadership position, with 28.1% share of the market, having seen its sales rise marginally since this time last year (+0.3%).

‘Morrisons was the fastest-growing retailer within the big four, increasing its market share for the first time since June 2015 with a sales uplift of 1.9% year on year,” Kantar Worldpanel said in a statement. ‘Although growth came from across the store, premium own label was a real bright spot – sales were up by 35%, while its revamped The Best range made its way into 14% of Morrisons baskets.’ 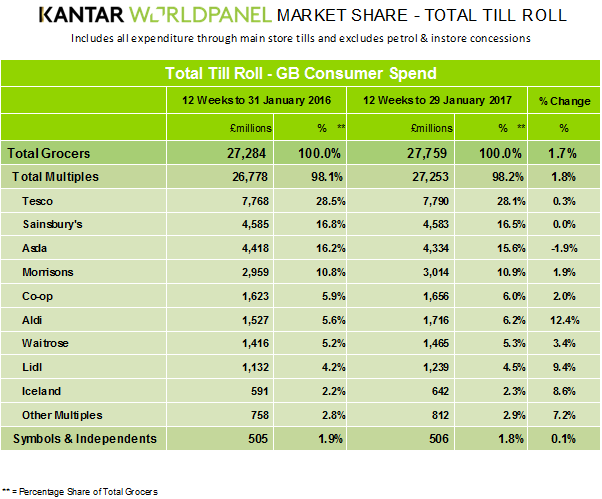