The UK's 'Big Four' retailers failed to post an increase in sales between them in the 12 weeks to 9 May, according to the latest grocery market share figures from Kantar.

According to the data, market leader Tesco posted a 0.0% increase in sales in the period, to sit on 27.3%.

Second-placed Sainsbury's and rival Asda are now neck and neck on 15.2% market share, with the former seeing a 1.7% decline in sales in the period, and the latter seeing a 0.2% decline.

Commenting on the findings, Chris Hayward, consumer specialist at Kantar, said that while Tesco fell flat, it is still seeing a boost from its Exclusively at Tesco products, as well as its '100 years of value' campaign, to promote its centenary.

"Looking ahead, the supermarket will be hoping the decision to make lines from its Jack’s discount arm available in store throughout May will pique customers’ interest and generate incremental sales.”

On Sainsbury's performance, Hayward added, "Sainsbury’s is approaching its own anniversary a bit differently from rival Tesco – as well as reflecting on the past 150 years and including the Queen in celebrations, it is also looking forward and championing smaller brands with its Future Brands initiative."

The strongest performer in the period was discounter Aldi, which increased its sales by 11.1% to sit on 8.0%, closing the gap further on fourth-placed Morrisons.

"The discounters continue to attract customers with nearly one million more households visiting Aldi compared with last year and an additional 630,000 shopping at Lidl," commented Hayward. "Around 75% of growth at both supermarkets is coming from the ambient and chilled aisles as people opt for value in a greater proportion of their basket."

Ocado, with a 6.4% sales increase, was the third fastest-growing retailer in the latest market share figures. 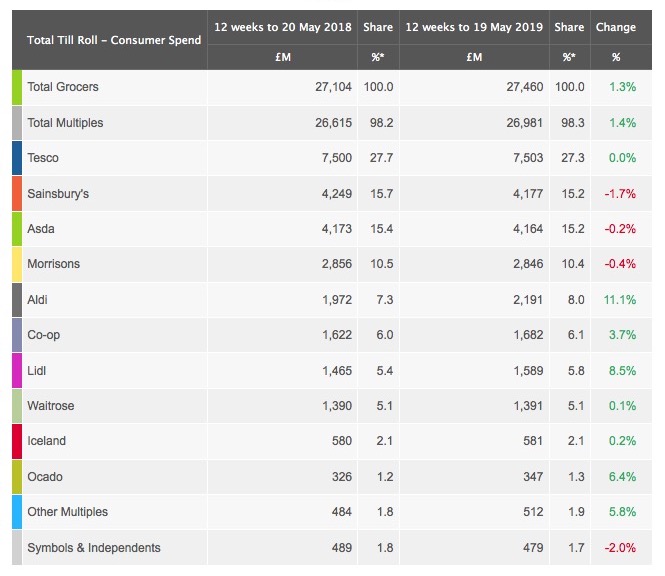