Dunnes Stores has emerged as Ireland's top retailer for the eleventh consecutive period, with sales up 6.3% year on year in the 12 weeks to 14 July 2019, according to latest data from Kantar.

Consumer insight director at Kantar, Douglas Faughnan said, "Twelve months ago Dunnes was the third largest supermarket in Ireland. Thanks to an additional 65,000 customers in the latest 12 weeks, the retailer has retained the top spot for the eleventh consecutive period."

Faughnan added that the retailer's performance is generally strongest in the second half of the year, offering it a solid base during the run-up to Christmas.

Overall sales in the Irish grocery segment increased by 2.7% year-on-year during this period, the study found.

In the same period in 2018, sales increased by 3.1% due to a warm summer and the football World Cup.

In a first, Tesco and SuperValu witnessed a 0.8% and 0.5% decline in sales respectively.

"But every silver lining has a cloud, and both grocers were always going to face an uphill battle to replicate that performance this year."

Lidl witnessed the greatest increase in the number of shoppers opting for premium private-label products.

Sales at Aldi were up 12.8% year-on-year during the period, boosted by strong performance in the fresh produce category.

Sales of dairy products were up by more than a third, while vegetable sales increased by 15%.

Sales of key meal ingredients saw strong growth across all the retailers.

Sales of herbs were up 26%, while spaghetti sales increased by 10%, passata and mince grew by 15% and 11% respectively.

Deals offered by Dunnes and Lidl on the constituent ingredients for home-cooked classics like spaghetti carbonara and bolognese were found to be popular in both supermarkets. 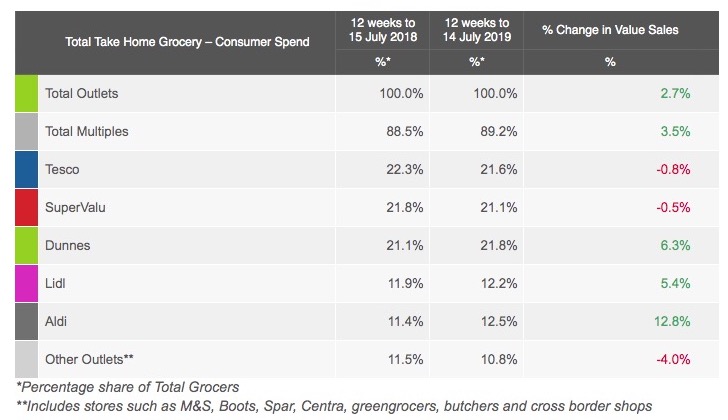 Masoutis To Offer 30% Of Net Profits As Bonus To Employees

"We Must All Strive To Avoid Close Contact", Says K Group Boss