Dunnes Stores has extended its lead over rivals SuperValu and Tesco at the top of Ireland's grocery market, according to the latest market share figures from Kantar.

According to the data, for the 12 week period to 6 October, Dunnes Stores sits on 22.5% market share, following a 5.5% increase in sales, which was largely driven by the retailer's Shop & Save campaign.

Commenting on Dunnes and SuperValu's performance, Charlotte Scott, consumer insight director at Kantar, said “Ireland’s two largest retailers, Dunnes and SuperValu, have both benefited from an out of season boom in sales of cleaning products. [...] Overall people have spent an additional €7.2 million on household cleaning in the past 12 weeks, which is up 5.9% on last year and driven by Ireland’s two largest retailers.”

Elsewhere, Tesco has seen a boost from confectionery sales, which have grown by 31.1%, according to Kantar.

“Tesco individually accounts for 70% of the market growth of confectionery, which has increased in value by 9.9% in the past 12 weeks," Scott added. "The retailer’s promotion on tubs of sweets, pricing them at €3.99, has proved particularly popular and it has even had to put quotas in place to limit shoppers to a maximum of 4 per person."

The period was also notable for marking a new record high market share for discounter Aldi, which now sits on 12.6% share, following a 10.9% sales increase. The discounter has welcomed an additional 21,000 shoppers through its doors, with a particular push to target young families, according to Kantar.

Lidl has also seen an improvement in performance, with sales up 4.9% and market share increasing to 11.9%.

Grocery inflation stood at 1.46% for the 12-week period ending 6 October. The overall grocery market saw 3.3% growth in the period. 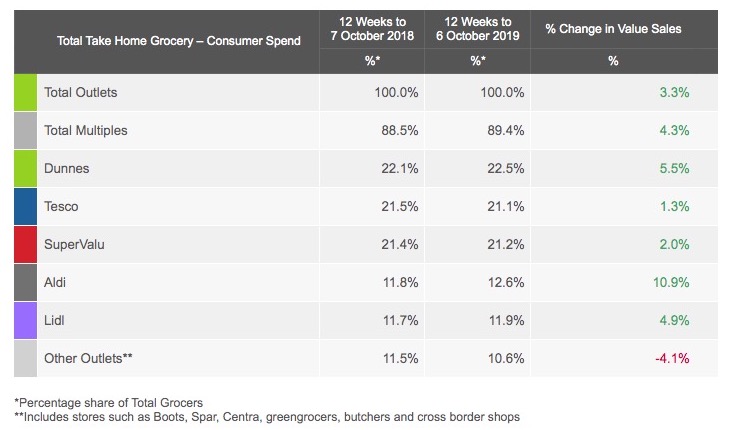 Grocery Sales Down 2.2% In Ireland As Shoppers Return To Socialising: Kantar

Gerd Chrzanowski To Take Over As Head Of Schwarz Group