Ireland's biggest retailers all saw sales grow in the 12 weeks to 29 December, according to the latest market share figures from Kantar, with Dunnes Stores retaining its position as the country's top grocer.

Dunnes Stores now holds 23.6% of the market, the data shows, following a 4.1% increase in sales in the 12-week period.

'Dunnes retained its position as Ireland’s largest retailer, and was the only grocer which didn’t experience a slowdown in growth compared to last month,' Kantar said in a statement. 'Christmas is typically Dunnes’ strongest season, as shoppers trade up to more premium products, and this year was no different.'

On Tesco's performance, Charlotte Scott, consumer insight director at Kantar, said that the retailer saw an increase in shopping trips during the period, to an average of 16.2 trips, up from 15.7 trips for the same period last year.

Discounter Aldi was the strongest performing retailer over Christmas, seeing sales rise 6.3% to put it on 11.3% market share, while Lidl hit 10.9%, it's highest-ever festive market share.

“Aldi and Lidl have increased their appeal among shoppers at Christmas and both reached their highest ever festive market shares," said Charlotte Scott, consumer insight director at Kantar.

"While in previous years, customers have chosen to do their seasonal shopping elsewhere, Aldi and Lidl found success in 2019 by expanding their ranges and encouraging big shops.”

Overall, December sales exceeded €1 billion for the first time on record, Kantar said, with the Irish grocery market seeing overall growth of 1.5% for the 12-week period. 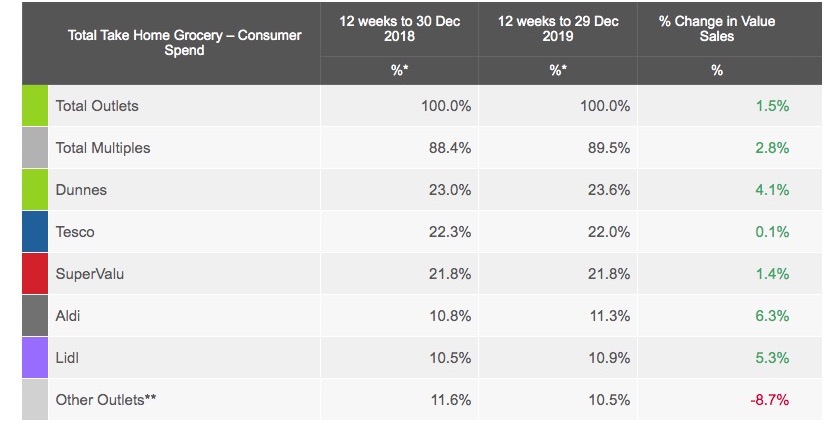 PepsiCo's pep+ Strategy Should Put It 'Ahead Of The Curve' On Sustainability: Analyst

Battle Lines Being Drawn As Amazon Moves On Bricks and Mortar Retailers: Analysis