The latest Kantar Worldpanel data for the 12 week period to 23 April has found that all ten major UK grocery retailers are in growth for the first time in three and a half years, boosted by a strong Easter period.

Aldi, on 6.9% market share, has increased its lead over sixth placed The Co-operative (6.1% share). The discounter posted the largest year-on-year sales increase of any retailer featured in the list, posting 18.3% growth.

The overall market grew by 3.7|% in the period, the fastest rate of growth since September 2013, and worth around £1 billion in additional sales to the grocery sector.

Commenting on the figures, Fraser McKevitt, head of retail and consumer insight at Kantar Worldpanel, cited the high level of inflation in the sector, which currently stands at 2.6%.

“While prices do look set to rise further, the current inflation rate of 2.6% is still below the average level experienced by shoppers between 2010 and 2014,” he said.

“A strong Easter also contributed to the market’s growth this period. In the past 12 weeks British shoppers splashed out £325 million on Easter eggs with almost three quarters of the population buying at least one. Consumers plumped for more premium confectionery lines this year – the average price paid for an Easter egg rising by 8.6% to £1.65 – while 20 million packs of hot cross buns were bought in the Easter week alone.”

Prices have been rising since the 12 weeks to 1 January 2017, following a period of grocery price deflation which ran for 30 consecutive periods from September 2014 to December 2016, Kantar Worldpanel said. 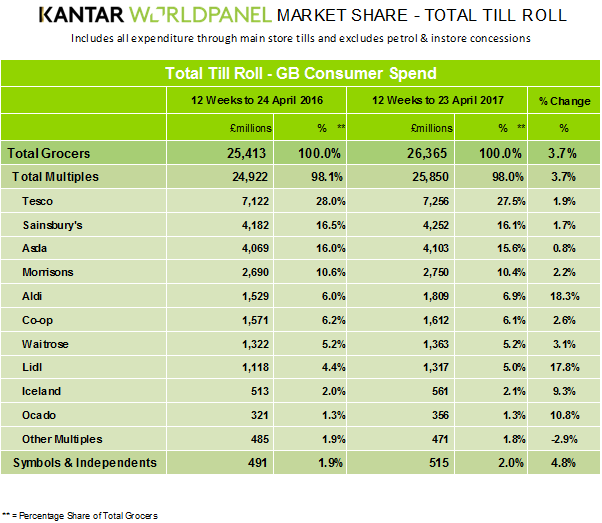 Appointment Of Saint-Affrique As Danone CEO 'Preferred' By Shareholders: Reports

Sonae Says Portugal's Recovery And Resilience Plan Is A 'List Of Expenses': Report