The latest UK market-share data from Kantar Worldpanel, for the 12 weeks to 26 March, has found that Morrisons is the only one of the Big Four retailers to post an increase, rising 0.3% year on year, to stand on 10.4% share.

“Slowing growth rates because of the late Easter meant that Morrisons was the only one of the Big Four to grow sales over the period, up 0.3% during the past 12 weeks,” said Fraser McKevitt, head of retail and consumer insight at Kantar Worldpanel.

“However, strong performances in produce and chilled convenience weren’t enough to stop Morrisons’ market share slipping by 0.1 percentage points, to 10.4%.”

While Tesco’s sales were down, McKevitt noted that the group’s own Farm Brands range was performing strongly.

“Sales at Tesco were down 0.4% overall, although growth in its own-label Farm Brands remains impressive one year after launch – 64% of Tesco shoppers made a purchase from the line during the past 12 weeks. Despite success in this area, Tesco’s market share fell by 0.5 percentage points, to 27.6%. At Asda, sales fell by 1.8%, while Sainsbury’s declined by 0.7%.”

Elsewhere, Aldi has consolidated its position in fifth place, on 6.8% share, after a 14.3% rise year on year. The Co-operative, which was ahead of Aldi in the market-share rankings at this stage last year, is on 6.1% (a 0.8% increase).

Kantar Worldpanel noted that grocery-price inflation stood at 2.3% for the period, and that prices have been rising in the grocery space since the 12 weeks to 1 January, following 30 consecutive periods of price deflation in the sector.

“Inflation shows no signs of abating,” said McKevitt. “The price of everyday goods is up by 2.3%, compared to this time last year, and rising prices cost the average household an additional £21.31 during the past 12 weeks.

“We expect inflation to continue to accelerate, and, as a result, we’re likely to see consumers looking for cheaper alternatives. A reduction in promotional activity means the proportion of spending on promotions now stands at just 32.9% – 5.5 percentage points lower than last year. As a result, offers are becoming a less significant option for shoppers looking to save money. 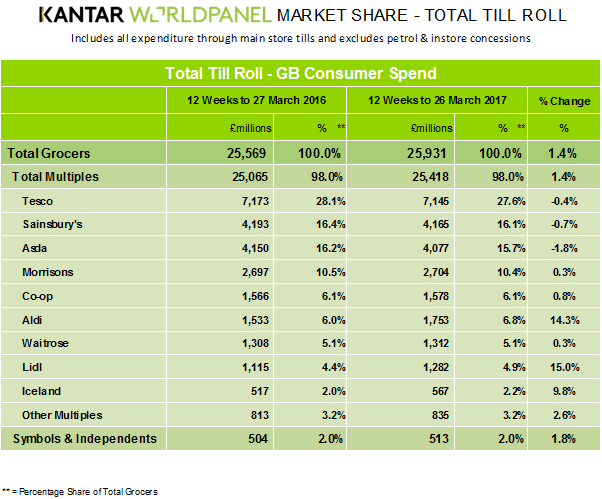