Sainsbury's was the only one of the UK's 'Big Four' retailers to see an improvement in sales, albeit a marginal one, in the 12 weeks to 23 February, according to the latest Kantar market share figures.

The best performer, according to the Kantar data, was Lidl, which saw an 11.4% increase in sales to sit on 5.8% market share.

It is the first time that Lidl has been the UK's fastest-growing discounter since November 2017.

“Lidl has been benefiting from its store expansion programme for a number of years, hitting a landmark in February by opening its 800th British store," said Fraser McKevitt, head of retail and consumer insight at Kantar.

"The new locations have helped to bring in nearly 900,000 additional shoppers to the supermarket this period."

Ocado was the only other retailer to post double-digit sales growth in the period, of 10.8%.

The online-only operator, which holds 1.5% of the market, will be splitting from its longtime partner Waitrose this coming September.

Grocery inflation stood at 0.9% for the period, according to Kantar.

Due to fears over the growing coronavirus outbreak, several categories performed better than others, McKevitt noted.

"Sales of hand sanitiser increased by 255% in February. Meanwhile, other kinds of liquid soaps saw sales increase by 7%, and 10% more was spent on household cleaners," he said. 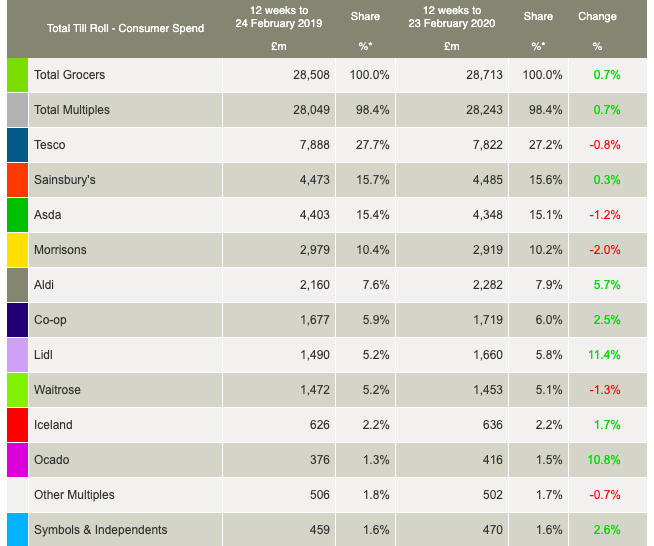