Sainsbury's was the best performing of the UK's 'Big Four' retailers in the 12 week period to 7 October, according to the latest market share data from Kantar.

The retailer posted a 0.6% increase in sales to sit on 15.3% market share, and was the only Big Four retailer to see a sales gain in the period.

On Tesco's performance, Fraser McKevitt, head of retail and consumer insight at Kantar, said, "The announcement that Dave Lewis will depart as Tesco chief executive next year has inspired inevitable reflection on his tenure and it’s worth noting that the retailer’s sales were in freefall when he joined in September 2014 – dropping 4.5% year on year.

"Since then, Tesco’s absolute and relative performance has improved and profitability has returned, but its market share is down from 28.8% at the start of his time there.”

“The discounters now account for a combined 14% of UK grocery sales, which is 0.8% percentage points higher than last year – an increase that’s worth nearly one billion pounds annually," said McKevitt.

"While traditionally known for its own-label ranges, Lidl’s 8.2% growth was boosted by sales of branded goods, which grew twice as quickly. Meanwhile, Aldi grew by 7.3% during the past 12 weeks as it attracted more new customers than any other retailer, with 689,000 additional shoppers."

Other strong performers included The Co-op, which grew at its fastest rate (3.9%) since April, with the retailer now holding 6.6% share.

Grocery inflation stood at 0.8% for the 12-week period ending 6 October 2019, a continuation of the steady price rise in effect since the 12 week period to 1 January 2017. 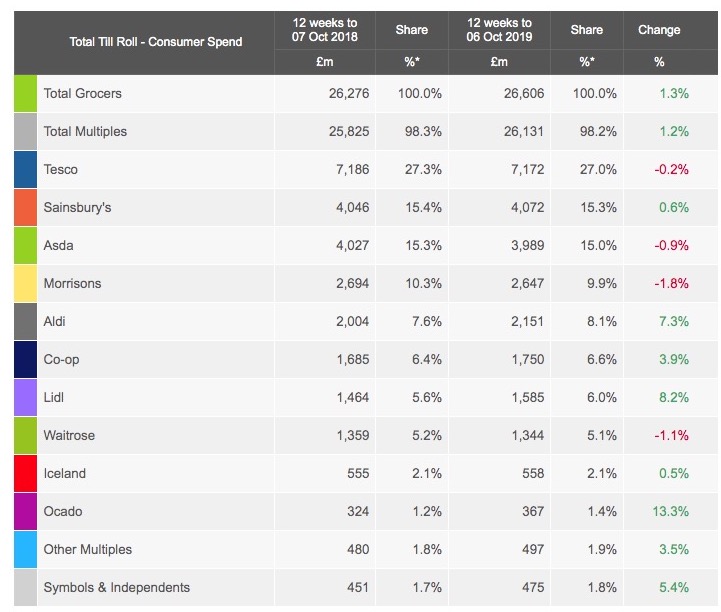