Following last week’s collapse of its bid to take over rival Asda, Sainsbury’s has reclaimed second place in the UK grocery market, according to the latest data from Kantar.

According to Fraser McKevitt, head of retail and consumer insight at Kantar, Sainsbury’s “achieved double-digit growth online, which coincides with the launch of its first mobile-only payment store in central London this week, further demonstrating its drive towards digital innovation”.

As to whether Sainsbury’s takeover plans for Asda, or indeed the CMA’s rejection of same, influenced shoppers, McKevitt added, “Two thirds of the public were aware of the proposed merger: the majority of those who knew about the CMA ruling didn’t have an opinion as to whether it was a good or bad outcome, while only one third welcomed the decision.”

Tesco retains top spot in the UK market, with a share of 27.3%, which is a 1.0% increase in sales since last year.

“More than three quarters of British households visited Tesco in the past 12 weeks, over five million more than each of its two closest rivals,” said McKevitt.

Arguably the most impressive mover in the period was Lidl, however, with growth of 8.6% pushing Lidl’s market share to a new high of 5.7%, up 0.3 percentage points compared to the same period last year.

“Half of Lidl’s sales now come from the fresh and chilled aisles and its performance this period was fuelled by customers spending an extra £14 million on dairy items and £13 million on fruit, vegetables and salads,” said McKevitt. 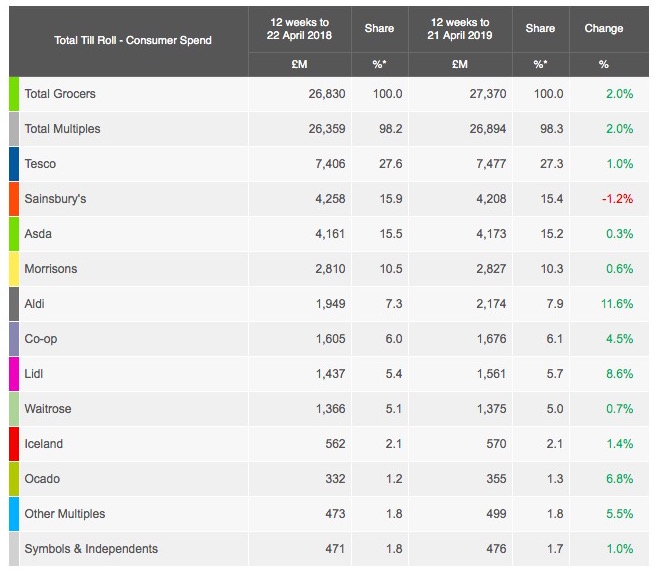