The figures for the 12 weeks ending 18 June 2017 also reveal that the Irish grocery market has grown at the fastest rate since January 2017.

“The grocery sector grew by €80 million over the past 12 weeks – that’s a 3.5% increase on the year before,” said Cora Campbell, consumer-insight director at Kantar Worldpanel.

“While average pack prices are down, shoppers are choosing to take advantage of this recent period of deflation by adding more items to their baskets per trip, driving the market’s overall growth.”

“In the face of continuing competition, the major retailers’ investment in developing and improving their own-brand lines is paying off. Overall sales of private-label goods are up by 4.2%, and they now account for 54% of grocery spend – the highest proportion since March this year.”

SuperValu has the highest market share in the country for the second period in a row, but its lead over supermarket giant Tesco has narrowed to 0.2 percentage points.

“SuperValu can’t remain complacent. Second-place retailer Tesco is growing ahead of the market, at 3.8%,” added Campbell.

Despite a drop in shopper numbers, the figures show SuperValu's customers are spending an extra €0.60 each time they shop, contributing to a 2.5% increase in overall sales. 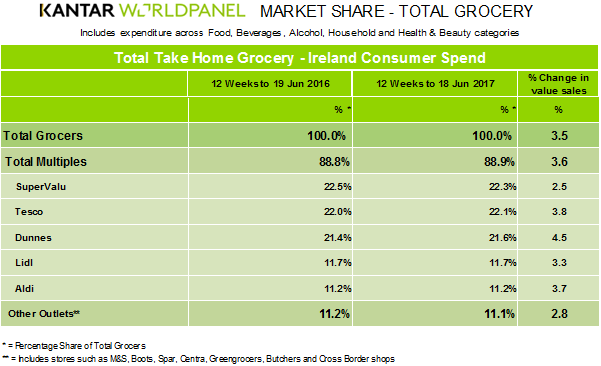 Migros Expands Partnership With Too Good To Go To National Level