However, the figures for the 12 weeks ending 10 September 2017 also show that second-place Tesco experienced its strongest period of growth in over five years.

“SuperValu remains the largest grocer, with a market share of 22.1%," said David Berry, director at Kantar Worldpanel, "although strong sales growth from Tesco – its highest since April 2012 – has helped narrow SuperValu’s lead to just a 0.1 percentage point.

“Tesco saw sales grow by an impressive 4.3% during the past 12 weeks, compared to the same time last year. Although prices have fallen overall at the grocer, this has been countered by an increase in spending – the average shopper spent €15 more with Tesco than during the same period last year," said Berry.

Just below market leaders SuperValu and Tesco, Dunnes Stores held its market share steadily, at 21.6%, although Berry noted that "performance has been mixed" for Dunnes during the latest quarter.

"Although spending per trip has increased by 5%, the percentage of the population visiting the store actually dropped by 5% during the same period. The challenge now will be attracting those lost shoppers back to the supermarket – a vital step if Dunnes is to improve its market-share ranking.”

Deflation in the Irish grocery market eased slightly, compared to last month, standing at 0.4%, although falling prices did not prevent overall market growth, which was up by 2.3% year on year.

“As Irish families head back to school, we’ve seen strong performance from a number of lunchbox staples," added Berry.

"Sales of cooked meats and bread increased by 3.7% and 3.6%, respectively, while crisps posted a particularly strong sales increase – up 12.1%,” he said. 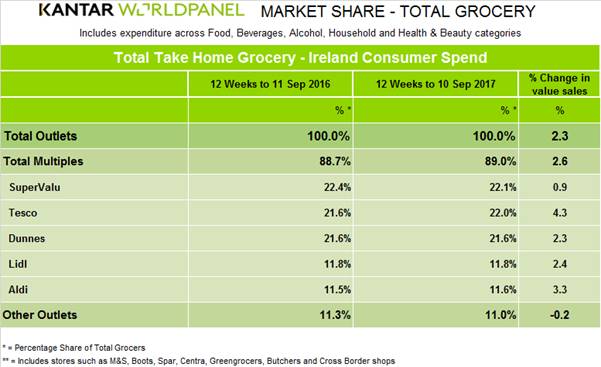 The Need For Speed – How Yandex.Lavka Is Seeking To Raise The Bar For Grocery Delivery

Up To A Third Of Physical Store Space Could Be Dedicated To Online Fulfilment: Study

Stay up to date - Get a FREE weekly email summary of all the important European supermarket news direct to your inbox every Friday. Simply sign up for an account, tell us which market sectors interest you and we’ll do the rest. You can cancel your weekly email newsletter subscription at any time by clicking the unsubscribe link in the email.