The UK grocery market posted a 0.5% increase in sales in the the 12 weeks to 8 September, according to the latest market share figures from Kantar, however the 'Big Four' all saw sales declines in the period.

Morrisons, which saw its market share fall below the ten-percent mark (9.9% market share), saw a 2.0% decline in sales, according to the Kantar data.

Of the 'Big Four', Sainsbury's put in the strongest performance, according to Kantar, with its Price Lockdown strategy appealing to shoppers, while there were also bright spots for Tesco, "including sales of free-from products, which were up 11%, and its own value lines like Redmere Farms and Creamfields, as sales of these ranges totalled over a third of a billion pounds," said Fraser McKevitt, head of retail and consumer insight at Kantar.

The best performer in the period was Ocado, which saw a 12.7% increase in sales to sit on 1.4% market share.

“With one year to go until Ocado starts selling M&S products alongside its own lines and national brands, sales at Ocado were up by 12.7%. Ice cream, cheese and sparkling wine all experienced growth in excess of 20%," said McKevitt.

Elsewhere, the discounters also put in a strong performance, with Aldi (8.1% share) seeing a 6.3% increase in sales, and Lidl (6.0% share) seeing a 9.2% sales boost, hitting a new landmark in the process.

“Lidl has crossed the 6% market share line for the first time, and an additional 618,000 shoppers visited the retailer compared with last year, helped by store openings, refurbishments and its newspaper voucher deals," said McKevitt. "Having moved through the 5% barrier as recently as May 2017, the retailer has taken just over two years to add another percentage point to its market share – one that’s worth £1.2 billion annually.”

The period included an August Bank Holiday bathed in sunshine, which alleviated some of the comparatives with the previous year's heatwave, according to Kantar.

"The forecast for August Bank Holiday was more than welcome and shoppers made the most of it being the hottest one on record, spending £1.3 billion from Friday through to Sunday, which was marginally more than last year," said McKevitt. 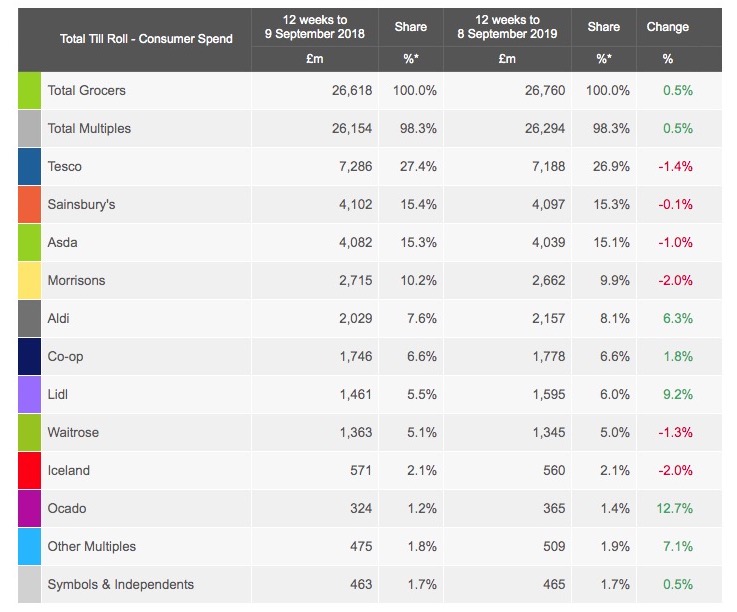