The UK's 'Big Four' supermarkets all saw a dip in sales in the 12 weeks to 1 December, according to the latest market share data from Kantar, with the discounters continuing to gain pace.

Morrisons saw the biggest slide of the Big Four retailers, with a 2.9% dip in sales. It holds 10.1% market share.

However, all is far from lost, as Fraser McKevitt, head of retail and consumer insight at Kantar, explained, “While the big four all lost share in the past 12 weeks, 98% of the British public still visited at least one of their stores during the past three months.

"Based on previous years, we expect them to increase their proportion of sales in the coming weeks as shoppers turn to familiar favourites and the traditional retailers in December.”

At the same time, both discounters put in a solid performance ahead of the busy Christmas period.

“The good news continues for Lidl and 11.9 million shoppers visited one of its stores in the past three months – that’s 652,000 more than this time last year," said McKevitt.

"Lidl has been encouraging its customers to make bigger shops, running newspaper voucher deals that offer £10 off when the holder spends £40, and larger baskets over the qualifying spend made up 17% of trips in November.”

Overall, year-on-year supermarket sales growth slowed to 0.5% in the period, amidst the uncertainty of a General Election, a lacklustre Black Friday and a wet autumn, Kantar said.

Grocery inflation stood at 0.8% for the 12-week period. 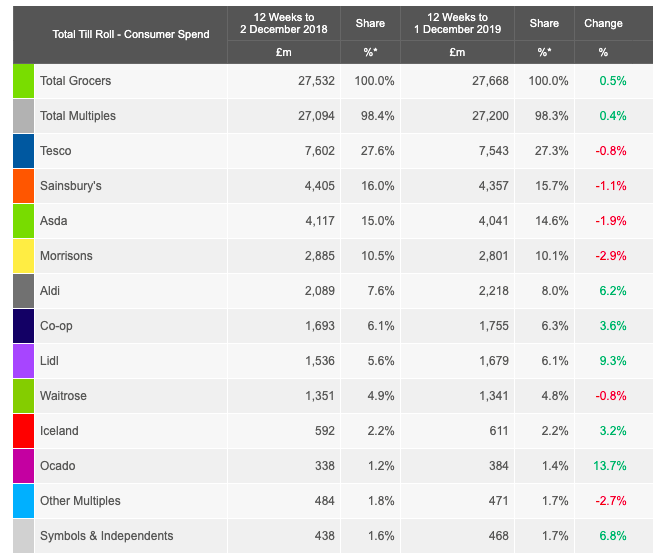