The UK’s Big Four retailers all posted either flat or declining sales in the 12-week period to 16 June, according to the latest market share data from Kantar.

According to Kantar, Tesco’s sales were flat year on year, despite higher volumes being sold (the retailer is engaged in a promotional campaign to mark its 100th anniversary). Second-placed Sainsbury’s, meanwhile, despite seeing a drop in sales, welcomed more affluent shoppers through its doors, which bodes well for future growth.

“The rise in wealthier shoppers bodes well for Sainsbury’s and its plans to shake up its fresh offer, which will place more emphasis on counters, bakeries, and food to go,” commented Fraser McKevitt, head of retail and consumer insight at Kantar. “The retailer will be hoping this provides another reason for shoppers to visit.”

Making the most of the mainstream retailers’ slump were discounters Aldi and Lidl. The former saw its sales rise by 9.3% in the period, to leave it on 7.9% market share, while the latter saw sales go up by 7.5%, to put it on 5.7% share.

Aldi, in particular, welcomed an additional 883,000 shoppers through its doors during the 12-week period, Kantar reported.

“Aldi’s announcement that it is rolling out more small, ‘Local’ format stores in London looks like an attempt to increase its share in the capital, where it currently takes home just one out of every £30 of supermarket spend,” said McKevitt. “Grocery sales growth in London currently stands at 4% year on year, nearly three times the national rate, showing why all retailers see the capital as a major area of potential.”

Another retailer that has upped its investment in the capital, the Co-operative, saw a 3.0% sales increase in the period, putting it on 6.2% market share, however, upmarket retailer Waitrose posted flat sales (0.0%) and sits on 5.0% share.

Supermarket sales grew by 1.4% in the period, with Kantar reporting that the modest level of growth is due to the wet start to the summer, and the fact that last year saw the hosting of the FIFA World Cup.

“These challenges are reflected in typical summer categories: in the past four weeks, sales of ice cream were £15 million lower than this time last year, while beer is down £17 million, and burgers £6 million,” said McKevitt.

“However, even unseasonable clouds have a silver lining. Shoppers sought refuge from the cooler weather and spent more on traditional comfort foods, with fresh and tinned soup sales up by 8% and 16%, respectively,” he added. 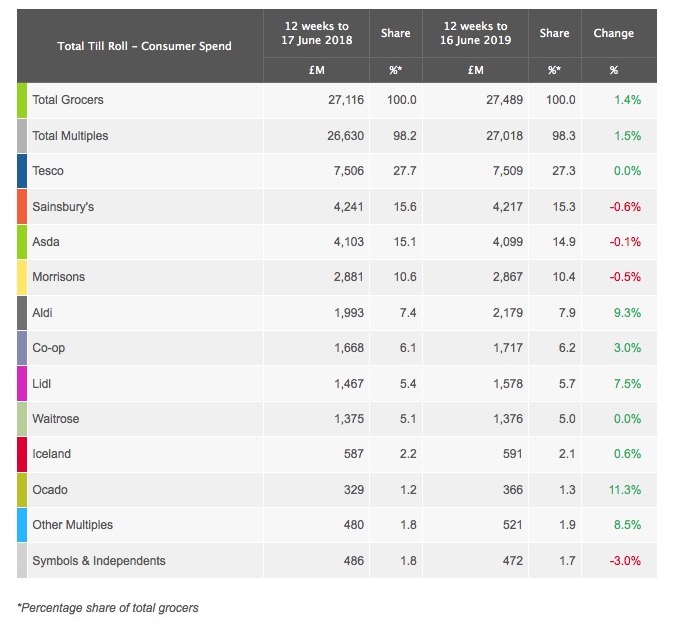