Dunnes Stores is more than a full percentage point ahead of the competition at the head of the Irish grocery sector, holding 22.8% market share, according to the latest data from Kantar.

Dunnes Stores saw 4.1% growth in the 12-week period to 1 December, with the overall market growing by 2.3%.

"Dunnes typically relies on customers doing their big shop and stocking up with large visits, but the business has shown it can be adaptable," commented Charlotte Scott, consumer insight director at Kantar.

"Ireland’s biggest grocer is also gaining traction outside of its usual Dublin heartland, growing strongly in Connaught and Ulster where it has historically held a smaller share.”

Musgrave-owned SuperValu places second in the rankings; its 1.7% increase in sales has lifted it to 21.6% market share, overtaking Tesco, which holds 21.3% share following a 1.1% sales gain.

“SuperValu’s highest share since January is largely thanks to shopper penetration, which increased this period having fallen last month," said Scott.

"This coincides with the retailer announcing its new loyalty scheme with Visa in November, designed to appeal to existing shoppers while also attracting new customers.”

Aldi (12.2% share) and Lidl (11.6% share) continue to show the strongest growth in the Irish marketplace, with sales up 7.9% and 5.8% respectively, with Lidl in particularly benefiting from increased average shop – the average Lidl basket contained 17 items in the period, a rise of 3.9% on last year.

Grocery inflation for the period stood at 1.2%.

With the Christmas period around the corner, the data also shows that old favourites sold well at Irish supermarkets during the 12-week period, with sales of seasonal biscuits up 16%, driven largely by sales in Tesco.

In addition, seasonal confectionery has also seen growth, with €8.8 million more spent on seasonal tubs of chocolate compared to the previous year – SuperValu saw its sales in the category grow by 31.1%. 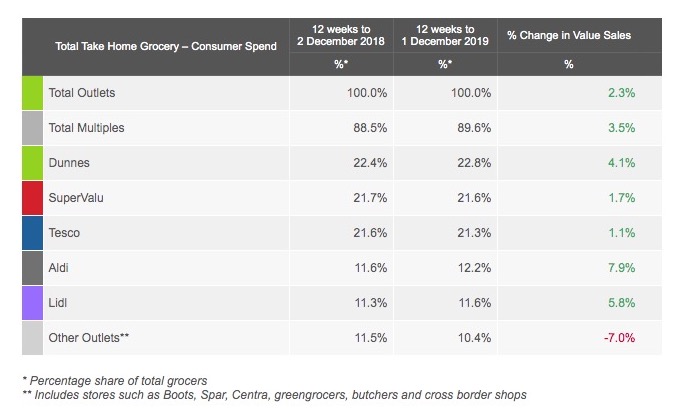 Eurospin To Open First Store In Croatia This Month

Eurospin To Open First Store In Croatia This Month