Irish grocery sales growth slowed to 1.3% in the 12 weeks to 26 January 2020, according to the latest data from Kantar.

The slowdown has been attributed to falling consumer confidence in the post-Christmas trading period, triggered by a general election in the country.

However, sales of plant-based products emerged as a bright spot for the sector as customers opted for healthier food items during this period.

"Though shoppers reduced their consumption of meat and dairy, households didn’t turn their backs on animal products completely. This points to an increase in flexitarian lifestyles as people look to cut back rather than go cold turkey."

Around 22% of households also abstained from purchasing alcohol during this period, up from 19% in the same period last year, data revealed.

SuperValu was the only retailer to buck this trend, reporting a 7.6% growth in the sales of alcohol during this period.

Lidl emerged as the strongest performing retailer, reporting sales growth of 5.6%. The discounter also increased its market share by 0.4 percentage points to 11%.

Bothan commented, "Lidl’s growth was driven by increased basket sizes as shoppers added three more items to their shop than the market average.

"More and more people are picking up their groceries at the retailer and 71.4% of households chose to shop at Lidl at least once over the latest period." 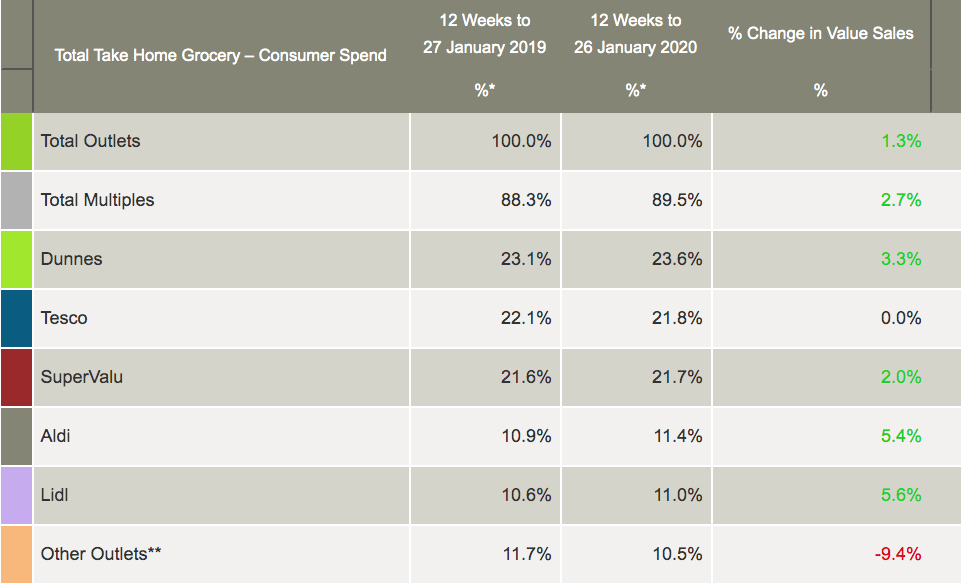 Dunnes Stores reported sales growth of 3.3%, a slower increase compared to its performance in recent months. The slowdown has been attributed to falling basket sizes and lower prices.

SuperValu grew its market share by 10 basis points to 21.7% during this period.

Botham added, "As the General Election loomed, falling consumer confidence meant a decline in shopper frequency for the market as a whole. While Tesco bucked this trend and shoppers visited the retailer more often, it wasn’t enough to boost sales and growth fell to 0.0%.

Elsewhere, Aldi reported sales growth of 5.4%, while its market share increased to 11.4% from 10.9% in the same period last year.