Take-home grocery sales in Ireland saw its fastest rate of growth in the past fifteen years, increasing by 25.4% in the latest 12-week period ended 17 May, according to the latest data from Kantar.

Retail analyst at Kantar, Emer Healy, commented, "The jump in grocery sales over the most recent three months [...] reflects the fact that it includes both the pre-lockdown surge in shopper spend and the eight weeks of stay-at-home advice from Government, bringing almost all meals into the home."

Healy also pointed out that these gains will be offset by a drop in the sales of on-the-go meals, drinks and snacks, impacting the overall performance of some supermarkets.

The data showed that online grocery sales increased by 76% year-on-year, with 15% of Irish households receiving at least one online delivery in this period.

Healy added, "This sudden surge in demand meant that the retailers had to act quickly to increase their online capacity, and have been rightly praised for extending their services to those who need them most.

"That includes reaching groups who are more vulnerable in the current crisis, with an additional 26,000 retired households ordering an online delivery over the 12 weeks to 17 May and over 65s spending an extra €8.9 million online."

Sales of haircare products and hair colourants grew by 25% and 73% respectively during this period.

Customers also continued to spend on alcohol and bought spirits worth €52.8 on 1 May, ahead of the bank holiday weekend.

Healy explained, "The holiday, coupled with a month of warm temperatures, meant that alcohol sales grew by a staggering 93% over the latest four weeks.

"It seems many of us enjoyed the barbecue weather as shoppers spent an additional €3.8 million on sausages and burgers. Ice cream sales were worth an extra €5.9 million."

SuperValu emerged as the fastest-growing retailer in the 12-weeks, with sales growing 32.7%.

It also claimed to hold the largest market share of 22.4% in this period, driven by its locally-focused store estate which saw 64,000 new shoppers.

Lidl boosted sales by 30.5% and held its market share at 12.0% as a result of its stronghold in Dublin, while Aldi saw an overall sales growth of 20.8% and an 11.7% market share driven by strong performance in the south of the country. 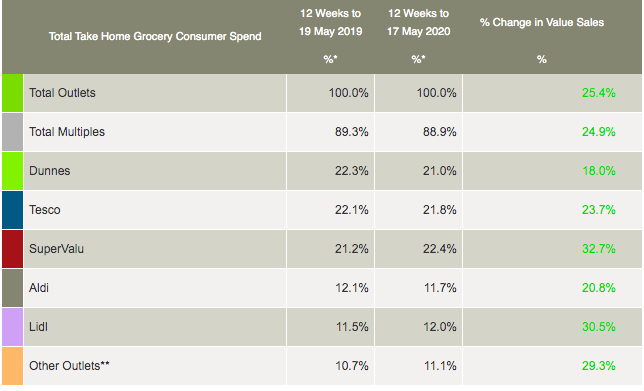 Tesco reported a 23.7% growth in sales with a market share of 21.8%, while Dunnes Stores saw an 18% growth in sales as shoppers spent an extra €10.39 per trip compared to the same period last year.

Healy said, "As lockdown continues, households with more mouths to feed at home have made their way through supplies and are now starting to top up depleted store cupboards.

"In accordance with government guidelines, we’ve seen shoppers limiting their time spent out of home by making fewer, larger trips at local stores, visiting grocers two fewer times over the past 12 weeks than they did in this period last year. Families with children under 16 pushed up their spending by 30% on average."

Lidl To Open Sustainable Store With Daycare Facility In Baden-Württemberg

Lidl And Kaufland To Waive Contracts For Meat And Poultry Suppliers