Products in the Fresh and Confectionery categories accounted for 61% of the growth in the grocery market across Western Europe in 2016, according to new Nielsen retail performance data.

The data found that shoppers spent €4.3 billion more on FMCG products at grocery retailers across the nine* major Western European markets in 2016 than in 2015 – growth of 0.9%.

Fresh products accounted for 38% of the overall market growth, followed by Confectionery/Snacks, which accounted for just under a quarter (23%).

The Alcoholic Beverages category accounted for 20% of overall growth. 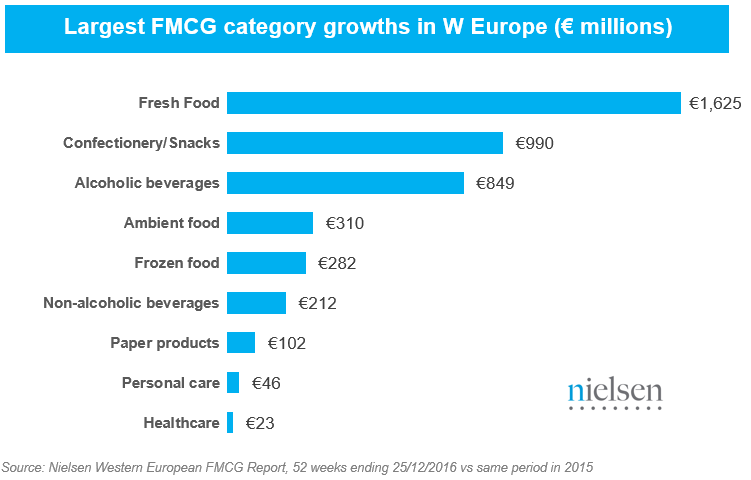 "It's interesting to see this significant growth coming from fresh food: fresh is clearly a strong focus for retailers in order to attract shoppers and have a positive impact on their image. In terms of sub-categories, fresh meals, beer, fresh fruit & vegetables and mineral water contributed the most to the grocery sector’s overall growth.”

The data also found that manufacturers outside the 10 biggest players accounted for 70% of the growth in the Western European grocery market, whilst retailers’ own label brands accounted for the other 30%.

In the UK, one of the main markets covered, fresh meals, sparkling wine and beer were the sub-categories contributing most to the grocery sector’s growth in 2016. Mike Watkins, Nielsen’s UK head of retailer and business insight notes that, “category growth generally follows a change in consumer tastes, such as sparkling wine, whilst a fall in a category’s sales value is often the result of deflation or a very competitive retail landscape, such as is happening in fresh meat and cereals.”