Grocery Sales Up Double-Digits In UK, But Growth Starting To Slow: Kantar

UK grocery sales rose by 10.8% in the 12 weeks to 6 September, the fifth consecutive period of growth, said Kantar, however growth is starting to slow as some aspects of pre-COVID life are resuming.

According to Kantar, sales growth decelerated to 8.0% in the most recent four week period, which is the slowest rate since April 2020.

“Grocery growth tailed off in August as the Government’s Eat Out to Help Out scheme got underway and people were encouraged to return to offices and resume normal routines," commented Fraser McKevitt, head of retail and consumer insight at Kantar.

“Fewer meals eaten at home meant consumers spent £155 million less in the supermarkets in the four weeks to 6 September compared with July. Alcohol sales dipped month on month, with wine down 5% and beer down 10%."

Online sales were up 77% year-on-year in the past four weeks alone, however this too has shown signs of a slowdown, dropping back to 12.5% of total sales in the past month, from a peak of 13.5%.

There are also signs that retailers are cognisant of the challenging financial circumstances facing many shoppers, with promotional activity now back to its highest level since February 2020.

In terms of the UK's main grocers, all of the Big Four saw sales rise in the period, although not all by double digits, with Tesco seeing sales up 10.5%, Sainsbury's growing by 8.0%, Asda up 6.3% and Morrisons seeing sales rise 12.9%.

Both discounters put in a double-digit performance, with Aldi and Lidl seeing sales up 10.0% and 11.4% respectively, while the strongest growth was again reported by Ocado, which saw sales rise 41.2% in the period. 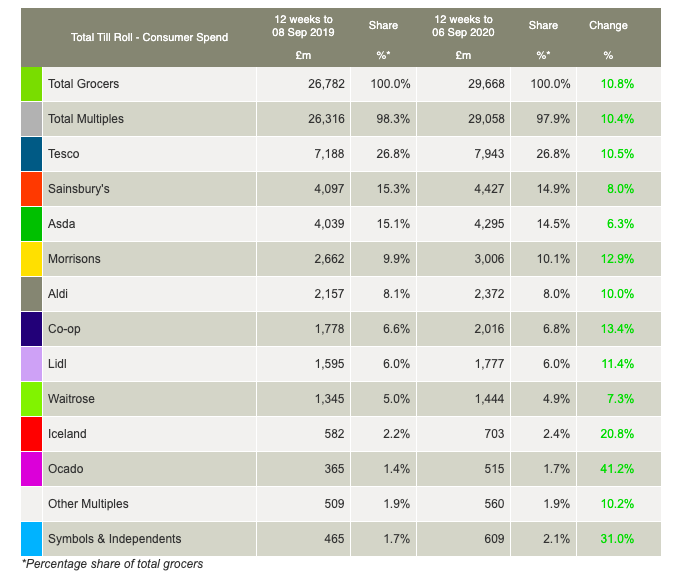