Lidl is opening its first ten stores in the US today (Thursday 15 June), with a range of offers that the retailer equates to 'Black Friday deals on a Thursday'.

The store openings have already garnered social-media interest from the American public, for whom Lidl is a largely unfamiliar name.

Among the opening promotions are a 22-inch kettle grill for $19.99, pork tenderloin for $2.49 a pound, pineapples for 89 cents, mangoes for 39 cents, and a smoothie-maker for $12.99. In addition, Lidl's award-winning Allini Prosecco will be on offer for $8.99 – 'roughly 40% cheaper than the leading Italian prosecco on the market,' according to the retailer.

The first 100 shoppers through the doors at each location will be presented with a wooden coin that entitles them to $100 in gift cards.

"Lidl will offer a simple and efficient approach to grocery shopping, which will mean huge savings for Lidl shoppers," the retailer said in a statement. "When shopping at Lidl, customers can expect to get top-quality goods and groceries at up to 50% less than other supermarkets in the United States."

Lidl has a rapid opening strategy in place that will see around 100 stores open between now and Summer 2018, and as many as 500 over the next five years.

Initial stores will be in Virginia, North Carolina and South Carolina, however, the list of planned and proposed outlets is longer still, incorporating sites in Ohio, Pennsylvania, Georgia, New Jersey, Maryland, Delaware and Texas, as indicated by an infographic developed by US-based analytics firm Planned Grocery. 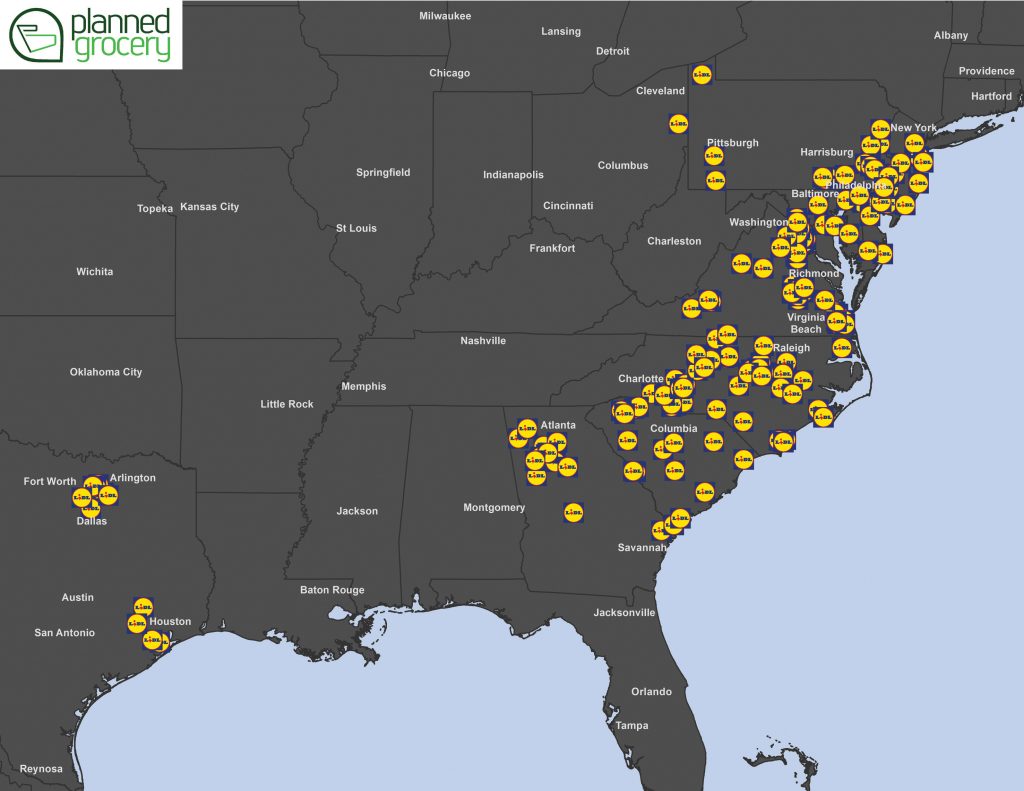 According to market-research firm IGD, Lidl, which boasted global sales of €96.6 billion last year, is targeting sizeable stores for its US roll-out, with a selling area of 20,000 square feet – larger than others in its international portfolio.

"However, their market-share gains will likely come at the expense of incumbent supermarket operators, as the discounters focus on their convenience and product-quality credentials, in addition to delivering a low-price proposition," says IGD Canada's Stewart Samuel.

Rival Aldi has already set out its strategy to deal with the new arrival. The discounter said earlier this week that it plans to spend $3.4 billion over the next five years to open 900 supermarkets.

Earlier this month, Brendan Proctor, the president and CEO of Lidl US, said of the new openings, “We cannot wait to open our first US stores and introduce customers to grocery shopping refreshed, retooled and rethought, to make life better."

Carrefour Teams Up With Uber Eats For Lockdown Deliveries