UK Grocery Sales Up 15.1% In Past Month As New Lockdown Measures Bite: Kantar

Take-home grocery sales in the UK were up 12.5% in the 12 weeks to 21 February, and by 15.1% in the past month, as hospitality businesses were shuttered due to new lockdown restrictions, Kantar said.

This was the highest rate of growth since June 2020, the market research firm added.

The latest Kantar data also showed that online grocery sales hit a new record share of 15.4%, up from 8.7% at this time last year.

"It’s a habit that seems to be sticking among British consumers, and internet orders now make up an average of 65% of grocery spending each month for people who do shop online," commented Fraser McKevitt, head of retail and consumer insight at Kantar.

"Grocers should take note of the customer satisfaction gap between online and in store – people that buy on the internet are typically seven percentage points happier with their shopping trip than shoppers at bricks and mortar stores.”

In terms of the performance of the UK's biggest grocers, market leader Tesco saw sales rise 13.2% in the period, giving it a market share boost of 0.2 percentage points. This was its first market share gain since December 2016, and was partially boosted by online, Kantar said.

The size of the average Iceland basket grew by more than half to £19.93 compared with the same time last year, the fastest rate of increase among all the retailers, Kantar said.

It's now coming up to a year since the pandemic upended consumers' lives and changed the way we shop, Kantar added, and this has been reflected in the fact that UK consumers have consumed an additional seven billion meals at home, as well as an extra two billion cups of tea, in the past 12 months.

"Overall, shoppers have spent £15.2 billion more on groceries during the pandemic – that’s around £4,800 per household on average, an increase of £500 compared with normal times," said McKevitt.

As Kantar noted, future periods are unlikely to see such significant year-on-year growth figures, as strong comparatives come into play, and like-for-likes will be tough against the heights of 2020. 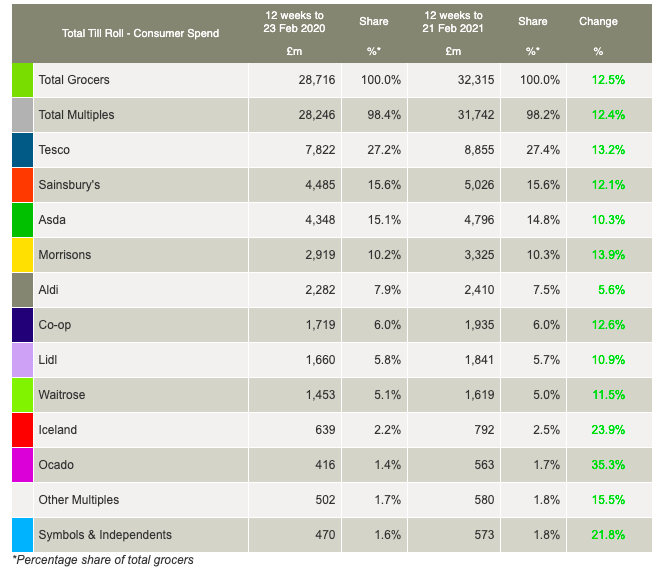