Private Label Accounts For 'More Than Half' Of Irish Grocery Purchases

New research from Kantar Worldpanel has found that private-label sales now account for more than half (54%) of grocery purchases in Ireland.

According to market-share data for the 12-week period to 21 May, retailer own-brand sales are up 3.8% on the same period last year, while overall value sales are up 2.2%, meaning that private label is growing at close to twice the rate of the overall market.

The overall sector was worth €2.37 billion over the 12-week period – up €50 million on the same period last year.

“With the average price per pack falling slightly, growth has been driven by households buying extra items, with the average shopping basket increasing in size. Retailers’ own-brands continue to lead the way," said David Berry, director at Kantar Worldpanel.

The data also shows that Musgrave-owned retailer SuperValu has maintained its position as the leading grocer in the Irish market, standing on 22.5% market share, following a 1.2% increase in sales since the same period last year.

“The recent strong performance from Dunnes Stores has continued, with overall sales improving by 4.9%, compared with last year,” said Berry.

“This is despite the number of consumers visiting Dunnes actually falling – the retailer had 54,000 fewer shoppers during the past 12 weeks. However, this has been offset by an impressive spending increase among remaining customers, with Dunnes shoppers spending 10% more – €47 extra on average – with the grocer during the latest quarter.”

The discounters have also continued their upward march. If combined, Aldi (which sits on 11.2% market share) and Lidl (11.4% market share) now account for more than the leading grocer in the market, with a combined share of 22.6%.

“Both retailers have benefitted from shoppers visiting them more often, with Lidl seeing almost one additional trip per shopper over the past 12 weeks,” said Berry. 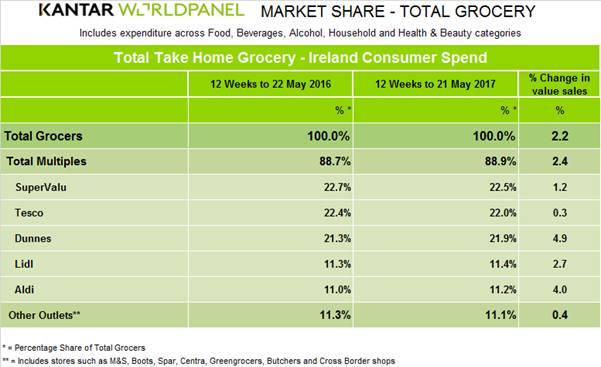