Co-op, Ocado See Sales Up By A Fifth In UK Market: Kantar

UK retailers The Co-operative and Ocado have seen their sales rise by a fifth (+20.0% and +19.4%) respectively, according to the latest market share data from Kantar, due to changed shopper habits as a result of the coronavirus epidemic.

According to the 12-week data to 19 April, which takes in both the initial stockpiling surge of March as well as the current changed shopping routines, all retailers saw a surge in sales, with the total grocery market rising 9.1% to £29.9 billion in the period.

'In the 12 weeks to 19 April, all ten major supermarkets increased take home sales as shoppers firstly stocked up in preparation for lockdown, then fell into their new routines,' Kantar said in a statement.

'These increases will have been partly offset by the reduction in other sales, such as lunchtime and on-the-go snacking.'

Commenting on the sales performance, Fraser McKevitt, head of retail and consumer insight at Kantar, said that retailer efforts to boost their online capacities are having an impact.

“Retailers’ efforts to increase their online capacity are clearly working, with shopper numbers up by a quarter," he said.

"Online sales now account for 10.2% of overall grocery, versus 7.4% last month, with the greatest increase among older shoppers. Although not traditionally big users of e-commerce, over-65s spent 94% more on deliveries than they did a year ago.”

Elsewhere, with more consumers shopping locally, the Symbols & Independents segment saw a 40.5% surge in sales, albeit off a lower base.

“Convenience stores increased sales by 39% in the latest four weeks, now accounting for 16.3% of the market compared with 12.4% a year ago," said McKevitt. "It should be noted, however, that this rise may be offset by the downturn in on-the-go consumption, which will have had a disproportionate effect on convenience shops.”

Grocery price inflation stood at +1.9% for the period. 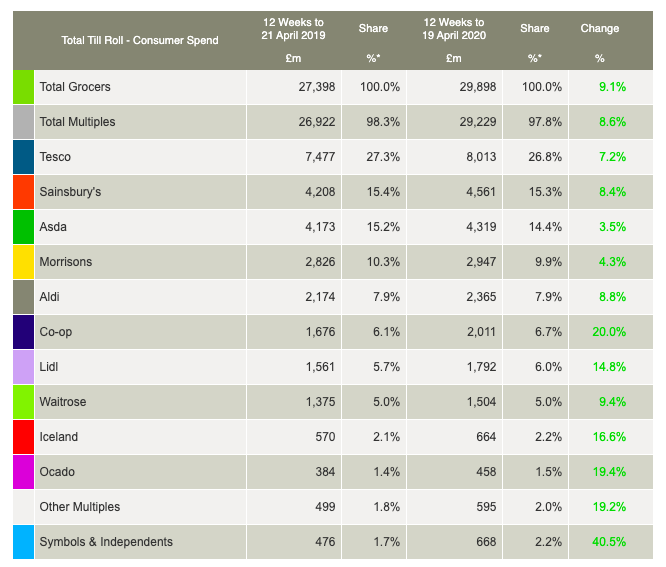 Switzerland's Migros Sees Online Sales Up By A Third, Despite 'Extreme' Year