Britain's grocers saw sales grow by just 0.2% during the 12 weeks to 29 December, the latest market share data from Kantar has revealed, the slowest rate of growth over the festive period since 2015.

Grocery sales totalled £29.3 billion (€34.5 billion) during the so-called 'golden quarter', Kantar said, which was up £50 million on the previous year, however the overall performance of the sector was still disappointing.

“There was no sign of the post-election rush many had hoped for in the final weeks before Christmas, with shoppers carefully watching their budgets," commented Fraser McKevitt, head of retail and consumer insight at Kantar. "In fact, many of us cut back on traditional and indulgent festive classics."

With the overall sector posting marginal growth, it's not surprising that the UK's 'Big Four' supermarkets also found the going tough.

Best Of The Rest

“At the end of the decade, it’s worth remembering just how quickly Lidl and Aldi have grown," said McKevitt. "Their current combined market share of 13.7% is more than treble what they held in December 2009, an unprecedented increase over the course of ten years.”

Ocado also put in a solid performance, growing by 12.5%, with the online-only operator now holding 1.3% of the market. 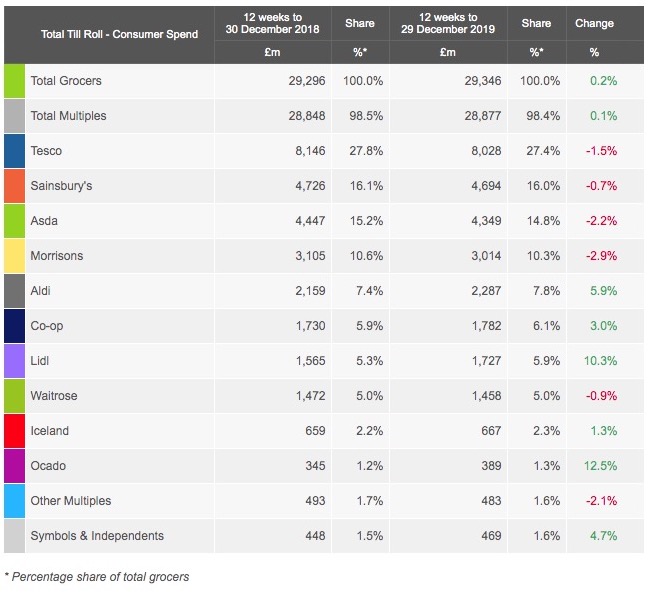