The hype might be building for the launch of Tesco’s reported discount formula, Jack’s, this week, but as the latest Kantar Worldpanel market share figures show, the new arrival will have plenty of competition.

After all, as Kantar Worldpanel data shows, the German discounters have doubled their share in the past five years.

“It’s worth remembering how quickly rivals Aldi and Lidl have grown their market share,” commented Fraser McKevitt, head of retail and consumer insight at Kantar Worldpanel.

“In the five years to September 2013, their combined market share increased by 2.4 percentage points to 6.8%. This growth then accelerated and in the subsequent five years the two nearly doubled their share to its current level of 13.1%.”

Notably, both discounters increased sales of branded products at a faster rate than overall market growth, however household brand names still only account for 8% of Aldi’s and 13% of Lidl’s sales.

Tesco remains the market leader, according to the figures, with a 1.9% increase in sales to put it on 27.4% share.

“While it is not yet known which lines Jack’s stores will carry, Tesco’s ‘Exclusively at’ brands such as Eastman’s and Creamfields are proving popular with shoppers,” said McKevitt.

“The own-label product lines launched earlier this year and accounted for £90 million of sales over the past 12 weeks – finding their way into 16% of Tesco shopping baskets.”

The period in question spanned the World Cup through to the Back to School period, and was a bumper one for sales, with the overall market rising by 3.8%, Kantar Worldpanel said.

“The warm summer has been kind to the supermarkets’ convenience format stores as consumers shopped locally for drinks and barbecue supplies, collectively growing sales by 7.6% compared to last year,” said McKevitt. 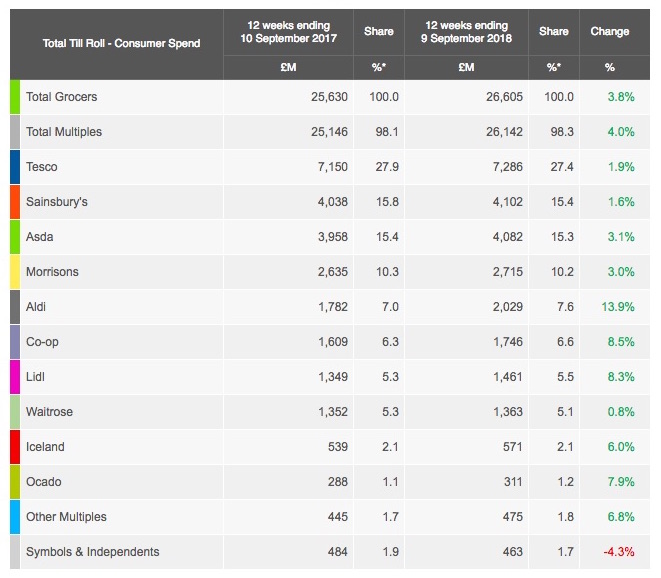