Irish shoppers spent a 'record-breaking' €1.2 billion in December on groceries as households prepared for Christmas, according to the latest data from Kantar.

The average shopper spent €134 more on groceries in December 2020 than they did in the same period in 2019.

Almost half of the Irish population hit the supermarkets on 23 December, making it the busiest shopping day of the year.

“Even though there was a temporary easing of restrictions on eating and drinking out in December, most of us still turned to the supermarkets to provide some sorely-needed festive cheer.”

Lidl saw 70% growth in alcohol sales in the three months leading up to Christmas, the study found.

The sales of branded products generated an additional €1.6 billion in 2020, with sales of premium private-label items increasing by 17.8% in the most recent twelve weeks.

Online sales generated sales worth €133 million in the latest 12-week period. Digital orders accounted for 4.1% of all grocery sales in December, up from 2.8% in December 2019. 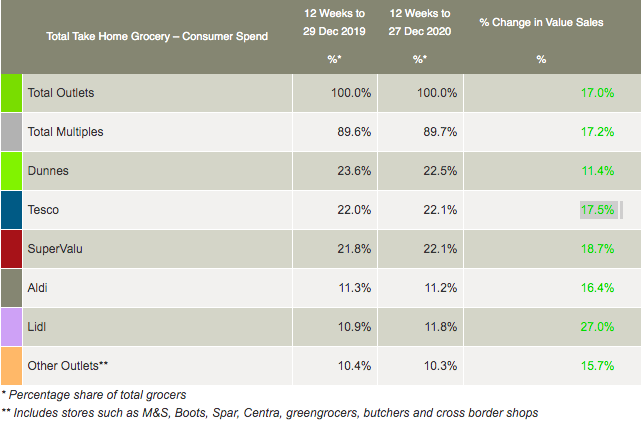 Dunnes Stores emerged as Ireland’s top retailer during the period, with a 22.5% market share and sales growth of 11.4%.

Lidl witnessed the highest sales growth of 27.0% in this period, with the discounter holding a market share of 11.8%.

Tesco and SuperValu were the country’s second-biggest grocers, with both holding a market share of 22.1%.

Aldi witnessed sales growth of 16.4% with the discounter holding a market share of 11.2%