All major retailers in Ireland have reported positive growth in the latest 12-week period, with Dunnes Stores retaining its position as the country's largest retailer, according to the latest data from Kantar.

The overall market grew by 2.6% during the 12-weeks ended 3 November 2019, marginally slower than the previous month.

Consumer insight director at Kantar, Charlotte Scott, said, "The slight deceleration in the past 12 weeks is largely down to shoppers being wary of spending and holding back slightly ahead of the big Christmas rush.

"However, with Halloween now finished, we’re already seeing evidence of people getting in the festive spirit as 6.5% of us have bought a mince pie – worth €383,000 to retailers so far this year."

Sales of soup and hot drinks in retail outlets increased due to damp weather in the period, the report said.

"Fresh soup grew by 9.9% this period, while hot drinks are up 7.7%," Scott added. "Biscuits also benefited from those additional cups of tea and coffee, growing at 2.9%."

On average, sales were driven by customers visiting retail stores more frequently in the past 12-weeks.

“Overall shopper frequency rose by 2.2% in the latest 12 weeks compared with last year, suggesting an increase in people shopping around for the best deals," Scott added. "This phenomenon is in no small part thanks to the popularity of the discount supermarkets – their comparatively smaller product ranges mean shoppers often visit them in conjunction with other stores where they top up on specific items."

Once again, Dunnes Stores emerged as Ireland's top retailer with sales growth of 4.4% and a market share of 22.8%.

It is anticipating further growth in the coming weeks as it enters what is traditionally its strongest time of year, the reported pointed out.

Scott explained, "Typically Dunnes performs well during the festive season as shoppers trade up and are willing to spend more on premium items. Last Christmas the retailer recorded its highest market share since March 2013, and having been top of the retailer rankings for over a year now, it will be looking to break that record this December." 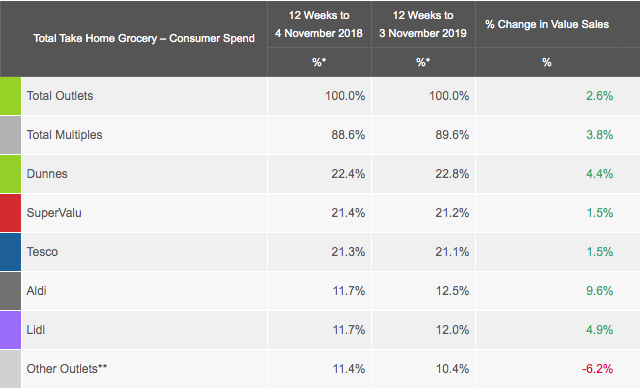 Tesco reported sales growth of 1.5% during the latest 12 weeks, and retained its position as the third-largest supermarket in Ireland with a 21.1% market share, just behind SuperValu at 21.2%.

Both retailers performed well over Halloween, recording an additional €6 million of confectionery sales between them, the report pointed out.

Aldi and Lidl saw sales increasing by 9.6% and 4.9% respectively during this period, driven mainly by new offers.

"Aldi has placed increased focus on brands in recent months, and as a result, branded sales have increased by 34.2%. These items now make up 10.8% of spend at the grocer, compared with just 8.8% this time last year," Scott added.

Lidl capitalised on the growing demand for meat-free products by introducing vegan burgers and sausages to its assortment.

French 'No' To Canada's Couche-Tard Regarding Carrefour Is 'Final': Minister