The UK's 'Big Four' supermarkets all posted a year-on-year sales decline in the 12-week period to 3 November, according to data from Kantar, with Morrisons seeing the biggest fall.

Fraser McKevitt, head of retail and consumer insight at Kantar, put the performance of the major supermarket groups down to slowing growth in the overall market, with Tesco and Sainsbury's best positioned to counter this slump.

"Tesco saw sales fall by 0.6%," he explained. "The UK’s largest supermarket recently unveiled its new ‘Clubcard Plus’ offer which gives subscribers 10% off two large shops each month. ome 1.8 million households made at least two trips to the retailer worth £50 or more in the past four weeks, a number Tesco will be looking to boost through its latest initiative.”

Outside the 'Big Four', the tale is largely one of growth, with the discounters again putting in a strong performance: Aldi, which holds 8.0% market share, saw sales increase by 6.7%, while Lidl, on 5.9% share, posted a 8.8% sales increase.

Lidl recently announced its intention to open over 200 new stores in the next three years, Kantar noted, and the discounter has also 'made a concerted push to encourage larger trips this year, and its vouchering scheme helped to boost several ‘big shop’ categories, including alcohol where sales rose by 18%'.

The Co-operative, which saw sales growth of 4.4% to sit on 6.5% market share, has now been growing continuously since May 2018, with MccKevitt noting that the grocer "welcomed an additional 274,000 shoppers through its doors in the past 12 weeks – fruit and vegetables proved particularly popular as fresh produce sales increased by 10%".

Grocery inflation stood at 0.8% for the 12-week period, which means that prices have now been rising since the 12 weeks commencing 1 January 2017. This followed a period of grocery price deflation which ran for 30 consecutive periods from September 2014 to December 2016, according to Kantar.

On the coming Christmas period, McKevitt added, "With many supermarkets already unveiling their festive advertising campaigns, the starting gun has been fired on the race to be Christmas number one. It should come as no surprise to see the grocers jostling for position early – with the average household expected to spend more than £380 on groceries during December.

"In total, shoppers will spend nearly £11 billion in that month alone, showing how it’s a crucial period for retailers.” 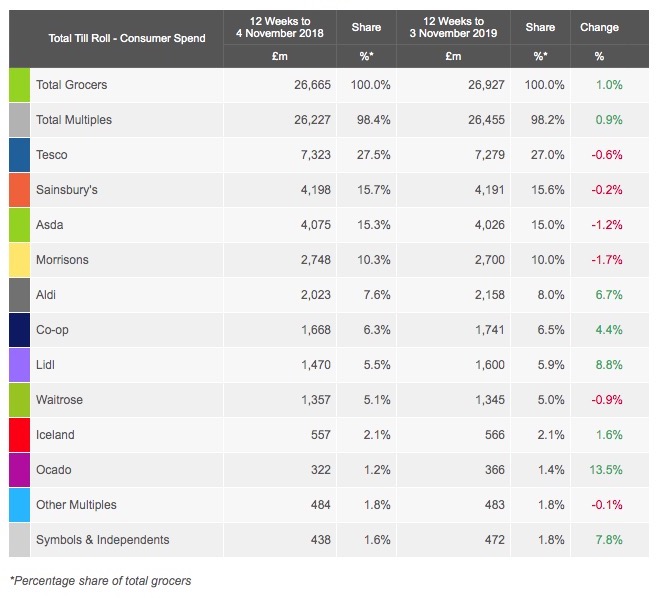 Appointment Of Saint-Affrique As Danone CEO 'Preferred' By Shareholders: Reports

Some US Retailers Amend Mask Policy In Stores: NACS