The UK's 'Big Four' retailers all posted declines in the 12 week period to 14 July, according to the latest market share figures from Kantar.

Overall, for the period, year-on-year sales fell 0.5% across the sector, which was the first overall decline recorded since June 2016, according to Kantar, which cited tough comparatives (chiefly last year's scorching summer, along with the World Cup) as the core reason for the decline.

“Although sales at the big four grocers fell collectively by 2.1%, they continue to account for two-thirds of all supermarket sales and there are bright spots for all the retailers," commented Fraser McKevitt, head of retail and consumer insight at Kantar.

While Tesco posted a decline, it did see success through its value own-brand ranges, Kantar reported, with its Farm Brands and Exclusively at Tesco ranges seeing sales up by 11%. Elsewhere, Sainsbury's has increased its shopper numbers by 254,000, despite its drop in sales.

Morrisons' performance, however, has not been helped by the retailer's propensity to sell products on deal, McKevitt noted. "Currently 47% of spend through the tills is linked to a deal, and this proportion is still increasing in contrast to many of its rivals," he said.

Best Of The Rest

Outside of the Big Four, the standout performer for the period was Ocado, which saw sales rise by 11.9%, albeit off a low base, to record a 1.4% market share for the period. The online retailer has seen its shopper base grow by 6% in the past year, while its shoppers are now buying online more frequently, according to Kantar.

The only other grocer to report a sales increase in the period was The Co-operative, which saw sales rise by 0.2% to leave the retailer with a market share of 6.4%.

“Growth of 0.2% may sound modest, but it is particularly impressive considering it comes on top of a record increase of 6.4% last year," McKevitt said. "Co-op’s popular beer and pizza deal, which offered a full night in for only £5, sold well in 2018 and has now returned to the shelves – the retailer will be hoping this eventually translates to additional market share, which remained flat this period at 6.4%.” 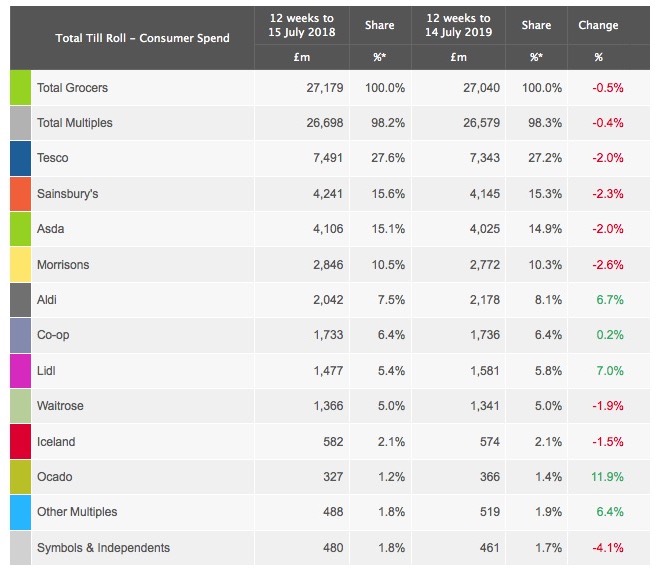