What Next For Tesco In Central Europe? Four Possible Future Scenarios

Following the sale of its Polish operations, Tesco has a number of options available for its Central European business, as Amin Alkhatib, senior retail analyst at IGD, explains.

Tesco has been reporting slow revenue growth in its Central Europe operations since at least 2017, with little to no profitability. The retailer has already disposed of much of its business in Asia, is putting its Southeast Asian business up for sale, and is withdrawing from its joint venture in China.

Potentially, the retailer is also looking to sell more low performing parts of the organisation to improve its sales performance and profitability.

Earlier this year, it announced the sale of its Poland operations, which was expected by many suppliers who trade with Tesco in the region.

The question now, is what direction the retailer will take next across its remaining operations in Czech Republic, Hungary and Slovakia?

Tesco has faced a lot of competition from discounters such as Lidl, Biedronka and Aldi in central Europe. To compete it has transformed its business, offering competitive prices and reducing costs, which together have helped boost profitability.

It has also shifted towards an EDLP strategy, which led to it guaranteeing shoppers low prices on 600 SKUs across the region. It has reduced the number of SKUs its hypermarkets and supermarkets carry by 25% and 50% respectively, which have helped lower inventory handling costs.

It has also shrunk the size of its hypermarkets and leased or sold some properties to reduce overhead and operational costs.

Following the implementation of these initiatives, it has reported improved profits across the three markets, but has continued to struggle to grow its market share. Tesco saw shoppers switch spending (mainly) to discounters, with the latter segment's competitive pricing and expanding assortment attracting their attention.

Transformation To An EDLP Model Was Not Effective Enough

The retailer appeared to struggle to successfully balance an EDLP strategy with its aim of growing market share and maintaining profitability. In the same countries, Lidl and Kaufland have been able to successfully implement an effective pricing strategy built on their expertise of efficient sourcing and distribution infrastructure.

The two Schwarz-owned retailers are adding new SKUs, while Tesco has been rationalising its range. They have also improved the in-store shopping experience and opened new branches in convenient locations.

To compete with all these elements, Tesco would have to rethink the way it looks at its assortment, distribution network and category management to implement an EDLP strategy more effectively.

With Improved Sales And Profits, Tesco Central Europe Could Be Sold Off In Parts

In 2019, Tesco Central Europe centralised the region’s distribution operation in Slovakia, as part of its transformation programme. To sell the business a whole, the asking price Tesco would want is likely to price-out potential acquirers, as many do not have the financial clout to buy a leading retailer’s network across three markets.

One option open to Tesco is the possibility of breaking up the business into the distinct formats it operates and sell them separately. Interest would likely come from retailers whose banners align with each format.

There would be an option to sell the supermarkets to an incumbent retailer, who has a comparatively low share in the market, such as REWE, the parent company of Billa and Penny. This would mean any potential purchase would be less likely to be affected by any monopoly restrictions.

Another scenario is if a retailer is seeking to enter one of these markets. For example, Kaufland could enter Hungary by buying Tesco’s large format stores. However, the country is one of the region’s strictest markets when it comes to expansion of international retailers.

It is unlikely that a local national player, such COOP in Slovakia and Czech Republic or CBA in Hungary, will have the finances for such an acquisition, unless they buy part of the business to boost their regional presence. 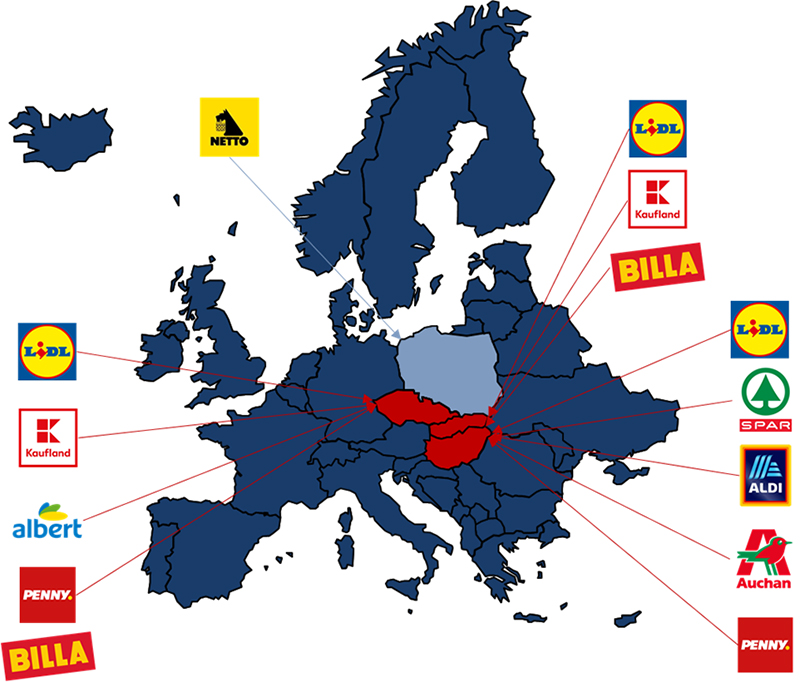 As Tesco looks to broaden its omnichannel business in the UK, it is possible it could use its learnings from its home market to grow the online business in central Europe. It already has an established online delivery operation across the three markets, covering the major cities in each.

There is potential for growth in the region, as the channel is still in its infancy. Also, the pandemic has boosted shoppers’ adoption of online grocery.

That said, Tesco would face competition from leading local pure play grocery retailers, such as Rohlik and Kosik in Czech Republic.

The British retailer is expanding its online service presence by adding more Click & Collect points in major cities in its three Central Europe markets. This could help revive traffic to stores.

The Click & Collect model makes sense because it avoids the last-mile logistics challenge, which has better profitability when compared to the home delivery service. It could also help retain existing shoppers and perhaps gain new ones, while Click & Collect customers might be attracted to go in-store to buy some additional items or those they want to see or feel before buying.

Investment in this channel could help recoup some of the traffic lost to competitors, but would dilute its profit per transaction.

EU Rules On Minimum Wages Is Not The Right Solution: EuroCommerce